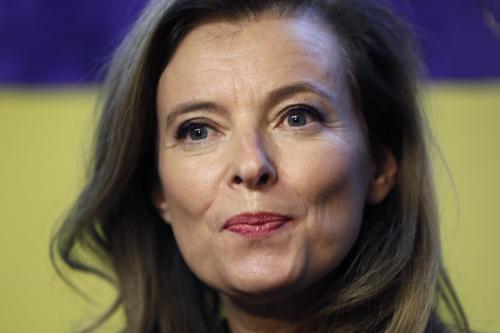 The daily newspaper Le Parisien said earlier on Sunday that Trierweiler, 48, had been taken to hospital after being shaken by reports of a liaison between her partner, French President Francois Hollande, and French actress Julie Gayet.

“She has been in hospital since Friday. She will leave tomorrow,” her spokesman Patrice Biancone told Reuters.

Asked about the future of Trierweiler’s relationship with the president, Biancone said: “She needs rest. Then she will decide what to do.”

On Friday, Hollande, 59, threatened to sue celebrity magazine Closer, complaining of breach of privacy after it said he was having an affair with Gayet, 41.

Hollande and Trierweiler, a journalist for celebrity magazine Paris Match, are not married but have been in a long-term relationship for several years.

Hollande has four children from a previous relationship with Segolene Royal, a senior member of his Socialist Party who ran for president against Nicolas Sarkozy in 2007. Royal announced their separation just after she lost the election.

Speaking on France 2 televison, Royal declined to comment on the affair, saying that French people had more important things to worry about.

“It is necessary to turn the page and get back to work,” she said.