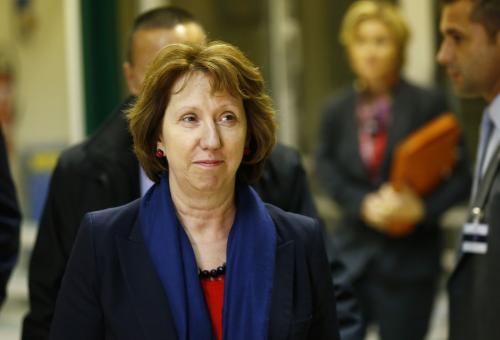 The proposals for an EU force of at least battalion-strength, roughly 700 to 1,000 soldiers, will please France, which has urged allies to do more to bolster the 1,600 troops it sent to its former colony last month to stop massacres between Muslim and Christian militias triggered by a March coup.

But it is too early to say how much support there is among EU member governments for sending a military mission that might put EU soldiers’ lives at risks.

EU diplomats will discuss the proposals for the first time on Friday. If one of the proposals wins the backing of the EU’s 28 governments, the force could be sent within a few weeks, one source said.

The different options for a possible EU military mission in Central African Republic were contained in a paper circulated on Wednesday by EU foreign policy chief Catherine Ashton, acting on a request by EU leaders last month.

The clashes in Central African Republic have killed more than 1,000 people since December and the United Nations says 935,000 have been driven from their homes.

The EU operation would be a bridging force posted in Central African Republic for four months to a year before handing over to either an African Union force or a possible United Nations’ peacekeeping mission, the diplomatic sources said.

The first option would be to set up bases in some towns in the west of the country and carry out patrols between them to create a secure area, the sources said. This could cover the road to neighbouring Cameroon.

A second option would be for the force to focus on Bangui, coordinating closely with other international forces.

Under this option, the EU force could take over the airport zone, allowing French forces there to deploy elsewhere.

More than 100,000 people have sought refuge at the airport outside the capital to escape the violence.

French troops are intervening alone in Africa for the second time in a year after ousting Islamist rebels in Mali.

Assuming the mission wins the required unanimous backing from EU governments, decisions on which member states would supply troops would only be taken later.

While European nations including Poland, Britain, Germany, Spain and Belgium have provided assistance to France, they have been slow to come forward with offers of troops.

The EU already has several military or civilian missions in Africa, including a counter-piracy force off Somalia and training troops in Mali.