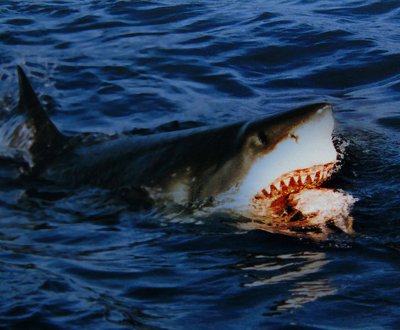 PHUKET (News Wires): Sharks killed at least a dozen people worldwide last year, the highest number in nearly two decades, according to statistics released by the International Shark Attack File (ISAF) at the University of Florida on Tuesday.

The Florida researchers confirmed sharks attacked at least 104 people worldwide in 2011, resulting in 12 fatalities. The majority of the attacks were deemed to be unprovoked attacks, but 29 were provoked by humans when they, for example, initiated physical contact with a shark.

The 2011 yearly total of 75 unprovoked attacks was slightly lower than the unprovoked attacks recorded in 2010, according to ISAF statistics. The year 2010 saw a total of 81 confirmed shark attacks, the highest figure since 2000. Six people were killed by sharks in 2010, similar to the six fatalities in 2009.

But the number of fatal attacks in 2011 was considerably higher than totals from recent years, with a yearly average of 4.3 fatalities between 2001 and 2010. These unprovoked fatalities were recorded from Australia (3), Costa Rica (1), Kenya (1), New Caledonia (1), Reunion (2), the Seychelles (2), and South Africa (2). The annual fatality rate was 16 percent, higher than the 6.7 percent average of the first decade of this century.

“We had a number of fatalities in essentially out-of the way places, where there’s not the same quantity and quality of medical attention readily available,” said ichthyologist George Burgess, director of ISAF. “They also don’t have histories of shark attacks in these regions, so there are not contingency plans in effect like there are in places such as Florida.”

Although sharks killed no one in the United States in 2011, most unprovoked shark attacks occurred in North American waters where ISAF documented 26 attacks, including eleven in Florida where the waters are attractive to both Florida residents and tourists, especially surfers. Three non-fatal shark attacks were also recorded in the U.S. state of Hawaii.

As usual, surfers were the most affected group in 2011 due to the provocative nature of the activity, accounting for about 60 percent of the unprovoked attacks. “When you’re inside the water, there’s much less chance of sharks making a mistake because both parties can see each other,” Burgess said. “Surfing involves a lot of swimming, kicking and splashing.”

Swimmers experienced 35 percent of attacks, followed by divers with about 5 percent.

But despite the spike in shark attack deaths, Burgess pointed out that humans pose a far greater threat to sea life than sharks do to humans. “We’re killing 30 to 70 million sharks per year in fisheries – [so] who’s killing who?” he asked. “The reality is that the sea is actually a pretty benign environment, or else we’d be measuring injuries in the thousands of millions per year.”

Iran’s semi-official Mehr news agency reported on Monday evening that “a number of people, deceived by the lie-spreading BBC Persian network,” had been arrested. The report cited unnamed sources as saying that those arrested were allegedly receiving ‘huge amounts’ of money to collect news and information from Iran for the BBC.

But a statement from the BBC denied the report, claiming no BBC Persian staff members are currently working inside Iran. The arrests come just days after the BBC accused Iranian authorities of a campaign of bullying and harassment against those working for its Persian service.

“These latest reports appear to confirm our recent statements and should be of deep concern to all those who believe in a free and independent media,” a BBC spokesperson said. “They admit that the Iranian authorities are engaged in a persistent campaign, intimidating and arresting people who they claim have connections with the BBC Persian service.”

In September 2011, Iran arrested six filmmakers who were allegedly paid to produce secret reports for the BBC Persian service. However, the corporation said they were independent and that it had merely bought the rights to broadcast their documentaries.

According to Reporters Without Borders, Iran is one of the worst countries in the world in regards to press freedom. Only Syria, Turkmenistan, North Korea, and Eritrea are considered to be worse environments for journalists.

PHUKET (News Wires): A female Indonesian teacher who was arrested on the Indonesian resort island of Bali late last year could get the death penalty after smuggling drugs with a street value of around $1 million, local media reported yesterday.

Theresia Avilla Yanti Siwi, 39, of Malang, East Java, was arrested on October 11 after arriving at Bali’s Ngurah Rai International Airport on a Qatar Airways flight from Kenya. She was caught with 3.8 kilograms (8.3 pounds) of methamphetamine, which has a street value of around Rp 9.3 billion ($1 million).

Siwi was carrying the drugs in a hidden compartment in her luggage after being promised $700 for smuggling them in. She was indicted on Monday at the Denpasar District Court in Bali and, with Indonesia’s harsh 2009 Narcotics Law, she could now face death.

Siwi’s arrest led to the arrests of Erika Dewi Widya Yanti, who recruited the teacher, as well as that of Nurhadi Imron, who reportedly operated the meth distribution scheme in Indonesia. Authorities have also claimed that Nurhadi is behind several drug smuggling operations in Indonesian prisons such as Bali’s Kerobokan and Jakarta’s Pondok Bambu penitentiaries.

Both are expected to be tried next week.

PHUKET (News Wires): Five workers went missing yesterday when the walls of an underwater tunnel in Japan collapsed, officials said. Search and rescue operations have since been suspended.

The accident happened at the Mizushima oil refinery in Kurashiki, an historic city in Japan’s southwest. The refinery is owned by JX Nippon Oil & Energy Corp, the largest oil company in Japan.

One of the six people working inside the tunnel managed to escape when the walls came down and quickly flooded the tunnel. The five other workers, who were located about 140 meters (460 feet) from the entrance to the tunnel, were trapped inside and remain missing.

The missing men are all between the ages of 38 and 61.

The tunnel, which goes to a depth of about 35 meters (114 feet) and is about 820 meters (0.5 mile) long, has been under construction since 2010 and was scheduled to be completed in 2013. The tunnel is to connect two JX Nippon refineries and will carry pipelines to transport oil and semi-finished products.

Police divers suspended search and rescue operations due to poor visibility and dangerous conditions in the tunnel. A police spokesman said debris and oil were floating through the tunnel, making it difficult-to-impossible for the divers to see.