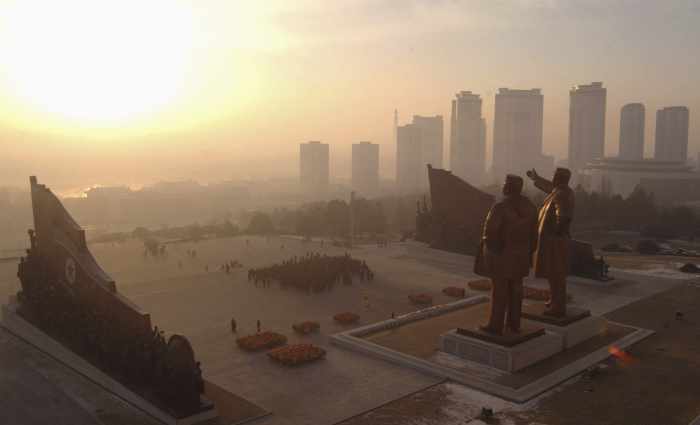 PHUKET: “Taking you to places where your mother would rather you stayed away from.” That’s how one Western travel agency advertises its tours to North Korea.

The U.S. government doesn’t want you to go there either. Three of its citizens have been detained in the last eight months while on tourist trips to North Korea, including Jeffrey Fowle, a visitor from Miamisburg, Ohio, who was arrested in May.

Despite the risks, tour operators say business to North Korea is booming, albeit from a low base for one of the most isolated countries in the world. For Pyongyang, tourism is one of the few sources of the foreign currency it relies on to overcome U.S. sanctions related to its nuclear and missile programmes.

While the country does not publish tourist numbers, travel agencies estimate as many as 6,000 Westerners visit the country every year, compared to just 700 a decade ago. Most are adventure-seekers curious about life behind the last slither of the iron curtain, and ignore critics who say their dollars are propping up a repressive regime.

The vast majority of tourists to North Korea are from neighbouring China, North Korea’s main ally.

“People are people,” said Keith Ballard, an American tourist currently in North Korea. “I can take politics out of it.

“Did anyone have any ethical concerns about me travelling here? Yes they did, some people said why would you even go there to support that government,” he said by telephone. “I said, hey it’s basically just tourism.”

Last month, the U.S. Department of State said it now “strongly recommends” against all travel to North Korea, citing the risk of “arbitrary arrest.”

Joshua Stanton, a Washington D.C.-based lawyer who served with the U.S. military in South Korea and writes a blog on North Korea, says the tourist dollars prop up the government of Kim Jong Un, the third of his family to rule the country.

“The companies selling these overpriced tours need customers gullible enough to believe that they’ll be safe there, and that their visits will somehow change North Korea for the better,” he said in an e-mail. “The first claim is false, and the second claim is dubious.”

The warnings do not appear to be having much effect.

Beijing-based Koryo Tours, one of the biggest operators sending Westerners into North Korea, has seen a tenfold rise in business in the past decade, peaking at about 2,100 visitors in 2012, according to Simon Cockerell, its general manager.

Around a quarter of those, Cockerell said, were American.

Troy Collings of Young Pioneer Tours, another China-based foreign travel agency specialising in trips to North Korea, says his company is seeing business double annually, and had nearly 1,000 clients in the past year.

Travel agents and others say those who have been detained in North Korea have usually been held for a specific reason, such as attempting to proselytise or independently contacting locals – which the U.S. travel advisory specifically warns against.

“I realised that if you are going there strictly as a tourist with no other agenda, then the DPRK is a very safe place to travel,” Dusty Mapson, a recent tourist to the Democratic People’s Republic of Korea (DPRK), the official name for North Korea, said by e-mail.

“I was a little worried about my military background being an issue during my trip,” said Mapson, who served in the U.S. Navy. But he faced no problems.

“It should be reasonably assumed that should you choose to travel to DPRK you know the potential dangers and understand that you are a guest in their country and there are certain rules you are going to have to follow while you are there,” he said.

Korean-American missionary Kenneth Bae has been in custody in North Korea for 18 months. Merrill Newman, an elderly U.S. citizen, was detained in Pyongyang when he told his North Korean guides he trained anti-communist guerrillas during the 1950-53 Korean War. He was released shortly afterwards.

Matthew Todd Miller, 24, was taken into custody by North Korean officials after entering the country on April 10, ripping up his tourist visa and demanding asylum, according to North Korea’s state-run KCNA news agency.

Shortly before North Korea said last week that it was holding Fowle, Japan’s Kyodo news agency cited unidentified diplomatic sources as saying an American had been detained for having allegedly left a Bible in his hotel.

Fowle’s lawyer has said he was not on a church mission, and that Fowle “loves to travel and loves the adventure of experiencing different cultures and seeing new places.” A 2010 profile of Fowle and his wife in the Dayton Daily News said he always had a “particular interest” in the former Soviet Union.

Before they visit North Korea, foreign travel agencies brief their clients about the dangers of travelling in the country. Visitors are told to respect local laws that prohibit the distribution of foreign literature, or doing anything that might defame the North Korean leadership.

Foreign travel companies also have to sign a contract with North Korean state tourism agencies stating that both sides “shall make the visitors obey and respect voluntarily the laws, regulations and public orders of DPR, Korea,” according to a copy seen by Reuters.

The contract also says all nationalities are permitted to enter the country as tourists, except for South Koreans and Israelis. Journalists are also barred.

Visitors travel from Beijing to the capital Pyongyang on one of Air Koryo’s Soviet-era passenger jets, or cross the border from China by train. Once inside North Korea, tourists are led on closely-chaperoned tours.

All expenses, including hotel and food, are paid for up front, although tourists can carry euros, dollars or Chinese yuan for out of pocket expenses.

Costs for a four-day visit range from $500 to $1,800, some of which goes to state-owned tourism companies in North Korea, travel agents said.

Despite North Korea’s fear of exposing its citizens to outside influences, it continues to invest in projects to attract more visitors.

Last year, North Korea opened a brand new ski resort near the eastern port city of Wonsan. It aims to make $43.75 million in annual profit from the resort, documents prepared for potential foreign investors and obtained by Reuters show.

“The most interesting part of this case is the growing contradiction between North Korea’s ambitions to earn revenue from tourism and the regime’s paranoia about outside influences,” said Stephan Haggard, a North Korea expert at the Peterson Institute for International Economics in Washington.

“The DPRK desperately needs trade and investment, but appears incapable of accepting the marginal loss of control such opening would entail,” said Haggard.

Four young students killed as ex-director has seizure behind wheel