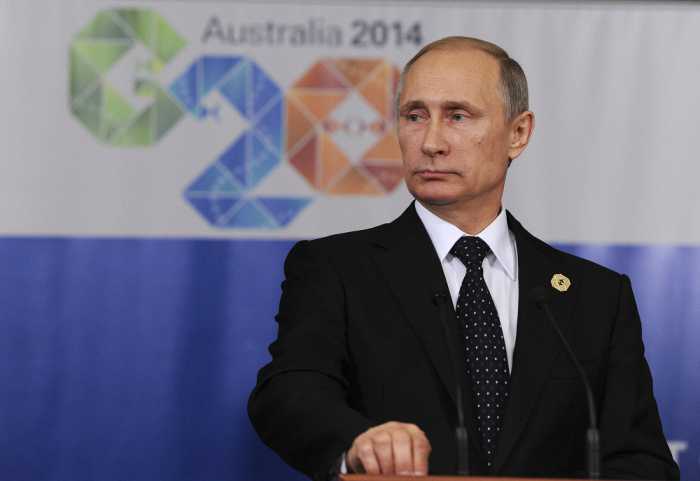 Isolated at G20, Putin shows he will do it his way in Ukraine
Reuters / Phuket Gazette

PHUKET: It may have looked in the West like Russian President Vladimir Putin fled this weekend’s G20 summit early with his tail between his legs after being berated over Ukraine.

But it was a different story in Russia, where pliant media praised Putin for being courageous enough to “enter the lion’s den”, stand up to his critics and defend national interests, and accepted his excuse that he faced a long trip home.

State television said the G20 had gone better for Putin than Western media had predicted and that U.S. President Barack Obama was the leader left isolated by two summits in a week.

One journalist, Dmitry Kiselyov, said the U.S. “uni-polar” vision of the world was clearly dead and asked whether Obama’s aim was to destroy Russia.

“Putin behaved unusually cold-bloodedly: he did not act like hysterical commentators of all stripes had suggested, praised the organisers of the G20 summit and called the forum ‘constructive’,” the pro-Putin Izvestia newspaper wrote.

“The main reason for his calmness is that the Russian president realised the United States, despite the current administration’s efforts, is steering the ship of Western civilisation onto a reef called China and can’t change course.”

Whether or not Obama or Putin emerged on top from the G20 summit in Brisbane and an Asia-Pacific summit the week before, one thing seems clear: anyone who thought the Russian leader would soon blink over Ukraine was wrong.

There is no sign of him changing tack and a European Union decision not to toughen sanctions on Russia on Monday is likely to be seen in Moscow as a victory for Putin.

“I think that in this case the sign was that Putin plans to behave in Ukraine as he thinks is necessary, not as the G20 leaders expect him to,” he said.

WHAT NEXT IN UKRAINE?

Putin has sought to keep the world guessing about his every move in the Ukraine crisis, but one of his overall aims has long appeared to be to prevent the country of 46 million moving further out of Moscow’s orbit and closer to mainstream Europe.

Western sanctions over the annexation of the Crimea peninsula, which have aggravated an economic slowdown and a currency crisis, have failed to dent his support in Russia.

He has brushed off accusations by Kiev and the West that he has sent tanks and troops into Ukraine to back the rebels, or to toughen his bargaining position for the G20 and APEC summits.

In Brisbane, he portrayed his version of events in the crisis as “reality” compared with the “virtual life” depicted by Western media and leaders.

With a Sept. 5 truce looking shakier than ever, a return to all-out conflict is possible in east Ukraine, with both sides accusing the other of rearming and redeploying, and Russian media referring constantly to great swathes of Ukrainian territory as “New Russia”.

Putin’s public remarks, however, suggest he would settle for keeping the status quo in the eastern regions the separatists control after months of fighting that has killed over 4,000.

This would mean leaving an unresolved, or “frozen”, conflict that makes the east ungovernable for Kiev and hampers Ukraine’s leaders’ drive towards mainstream Europe.

In an interview released on Sunday, Putin said Ukraine was a single entity and supported “federalisation”, rather than the Russian-speaking regions’ accession to Russia.

“Ukraine is an independent, free and sovereign state,” he said. “I am going to say something that some people in this country may not like. Let’s try to achieve a single political space in those territories.”

The next step in the crisis could be a renegotiation of the ceasefire deal agreed for east Ukraine in the Belarussian capital Minsk on Sept. 5. Putin said there were problems with implementation of the deal and called for dialogue, and the rebels have gone further, saying the deal must be reworked.