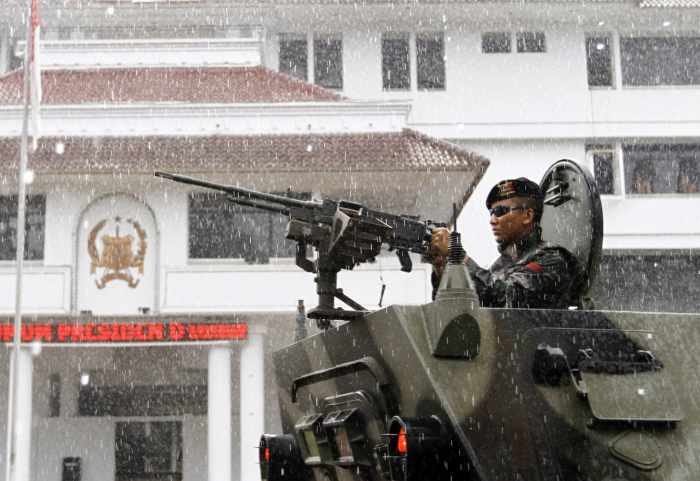 PHUKET: Indonesians began voting in a presidential election on Wednesday that has become a closely fought contest between the old guard who flourished under decades of autocratic rule and a new breed of politician that has emerged in the fledgling democracy.

Only the third direct election for president in the world’s fourth-most populous nation, the contest pits former special forces general Prabowo Subianto against Jakarta Governor Joko “Jokowi” Widodo, who have been running neck-and-neck in opinion polls.

It has also been the dirtiest and most confrontational campaign in memory in a country which traditionally holds up the value of consensus politics.

“This is the first time it is a wide open race for president … you now have two very different choices for Indonesia’s future,” said Paul Rowland, a Jakarta-based analyst for Reformasi Weekly.

Voting started in Indonesia’s distant eastern islands and finishes three time zones away in the densely populated west at 0600 GMT on Wednesday. Early counts by pollsters should give an idea of the outcome around 1200 GMT.

Jokowi, 53, is considered the most popular politician in Indonesia and is the slight favourite.

Born into poverty, he has stormed his way to the top rungs of leadership with a clean image and a reputation for competence in local government, a reversal of the autocracy, corruption and power politics that have weighed down Southeast Asia’s biggest economy for decades.

His rival, Prabowo, 62, has surged in popularity over the last few weeks, running on a platform of strong and effective government, invoking memories of Indonesia’s post-colonial and fiercely nationalist first president Sukarno, who ruled from 1945-67.

Prabowo’s high-profile military career, during which he rose through the ranks with remarkable speed, unravelled quickly after the 1998 fall of long-serving autocrat Suharto, his former father-in-law.

Prabowo was discharged from the army for breaking the chain of command and ordering troops to arrest activists. He was never investigated on any criminal charge and has consistently denied wrongdoing.

The election will mark the first time a directly elected president hands over the reins to another in the world’s most populous Muslim nation. Outgoing President Susilo Bambang Yudhoyono, who has largely disappointed in recent years, must step down in October after serving two terms.

The election commission expects high voter turnout. Of 190 million eligible voters, around 11 percent will be punching the ballot for the first time. Close to a third are under 30 years old.

A Prabowo win is expected to weaken markets due to concerns he will introduce protectionist policies in the financial and farm sectors, and launch big debt-funded spending projects.

The rupiah has eased more than 2 percent since mid-May when Jokowi’s big lead in opinion polls began to slip. Stocks on Tuesday traded near one-year highs as investors anticipated a Jokowi win.

Indonesia’s central bank, which will hold its monthly interest rate policy meeting on Thursday, said it stood ready to intervene in the market if needed.

“(Bank Indonesia) will ensure that rupiah stability will be maintained. We will not say what we will do but we will keep the fluctuation in a normal range,” central bank governor Agus Martowardojo told reporters.