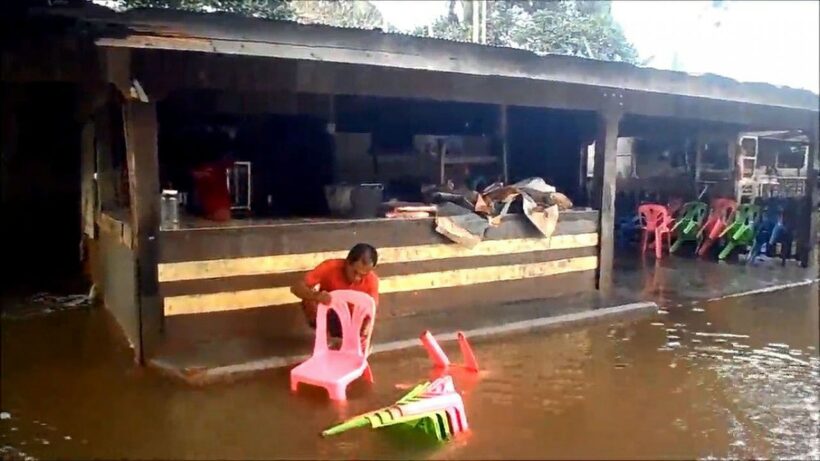 Day three of the Phuket King’s Cup today and fresh winds are waiting for the 83-strong fleet off Kata. Our Deputy PM has got into hot water over a flashy watch, a mother is being asked to explain why she chained up her daughter and a truck has fallen on a passenger van killing two in Chiang Mai. Welcome to your Wednesday.

Now the mopping up starts

Residents of eight communities in Narathiwat’s Sungai Kolok district have moved out of temporary shelters back to their homes after floodwaters significantly receded yesterday in the deep south.

Officials said only 30 riverside homes in three communities were still under 20cm of water. The rest of area was dry, so the 324 residents who had evacuated from 92 homes in eight communities moved back to their homes to begin cleaning up. 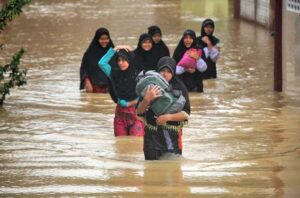 Mother of five chains up her seven year old daughter

A 33 year old Myanmar woman, who has received an warning warning for putting her seven year old daughter in chains in front of their apartment in Phuket’s Muang district, says she did so out of love and caring because the “naughty” girl could be harmed or run over by a car.

After an image of the chained girl was shared on Thai social media, and subsequent child abuse complaints, Phuket children and family home care went to inspect the apartment yesterday morning.

They told the family that they couldn’t chain the child, then took the mother, stepfather and children to the Phuket Police Station to record the incident. Officials have taken the young girl and her nine year old brother into temporary care pending an inquiry into the family’s situation. The mother has five children, the youngest just one month old to the woman’s new husband. 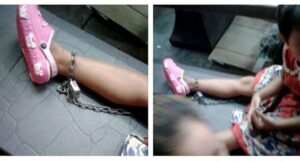 A modified pick-up truck for public transport has rolled down a steep slope on the second floor of parking lot in Chiang Mai, then fallen five metres, killing two female Thai tourists and seriously injuring a third.

The two tourists were visiting Chiang Mai from Phang Nga and were 60 years old. Their 74 year old friend, also from Phang Nga was taken to the local hospital. They were sitting in the back of their transport when the truck fell on the van. The two were thrown out of the van which rolled over and crushed them. 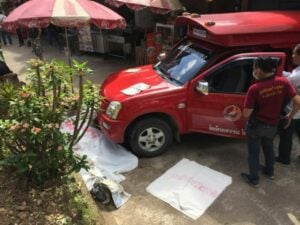 The Royal Thai Police have unveiled a record seizure of drugs in the capital with 12 million methamphetamine pills and 12 kilograms of crystal methamphetamine.

Mr Pongsakorn was arrested while in possession of 10.3 million methamphetamine pills. The suspect allegedly named two more persons in his network .

They were kept under surveillance which led to the information that a major consignment of meth pills was being brought into Bangkok from the northern part of Thailand. Their pick-up truck was intercepted by plainclothes police offices who arrested them without a struggle. Police are still on the hunt for another three or four members of the same syndicate.

In another haul down south, Police and Army officers have raided a storage area containing smuggled cigarettes in Songkhla’s Sadao district and seized 791 boxes worth 11 million Baht.

Police say the two houses had been used to store cigarettes smuggled from a neighbouring country without paying excise duties for distribution in Songkhla and other provinces. 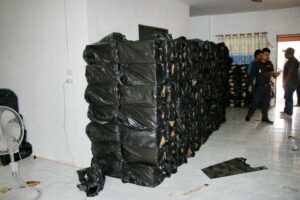 Thats a LOT of cigarettes!

Gold shops being told to ‘get legal’

The Revenue Department is asking defiant gold shops to enter a single account system or else they could face a money laundering probe.

According to the department, some 1,000 gold shops still refuse to register as legal entities, or enter the proper single-entry accounting system despite the other 7,000 gold shops having already registered.

The director-general of the department says gold shops which refused to adopt the single account system will face punishment under the anti money laundering law, which is severer than the revenue tax law. Combined gold turnover of all the gold shops in the country are estimated at between 400-500 billion baht annually but only between 200-300 billion baht is currently taxed. 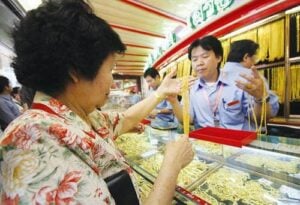 So, tell us about the flashy watch

Deputy PM and defence minister General Prawit Wongsuwan has landed himself in hot water after being caught wearing a flashy watch costing millions of baht in a recent photo.

A photograph of Prawit shading his eyes from the sun went viral on Monday after the new Cabinet had its first meeting and a group photo of the ministerial team was taken. The expensive looking timepiece was later found to be a Richard Mille that would have cost between 4 – 10 million baht.

Netizens questioned how a military officer could have afforded such a luxurious item and wondered whether he had reported his ownership of it to the National Anti-Corruption Commission. An equally flashy diamond ring was also being worn by the deputy PM. 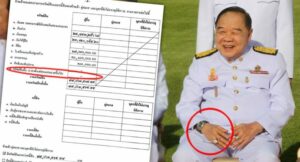 Daily briefings compiled with The Nation, Phuket Gazette and VOA.