PHUKET FC hangs up its boots

Phuket Football Club has hung up its football boots for the last time and announced its dissolution after getting sued by 3 foreign players for a total of 83 million Baht.

The President of Phuket FC held a press conference yesterday announcing the club is being forced to disband.

The 3 players, including Roland, Alonso and Santos, filed the lawsuit asking for 83 million Baht claiming that their contracts had been revoked unfairly and includes a FIFA fine.

Both the outgoing President and a consultant were scathing about previous administrations and have accused past staff of thefts and incompetence, leading to the current woes. 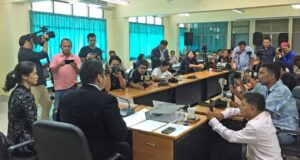 If General Prayut’s field trip to Pattani and Songkhla was meant to boost his popularity, the organisers failed on that count. The General appeared surprised by the locals when they welcomed him with yells and confrontation instead of polite applause and cheers.

While the junta might be popular among some Southern people, the government’s policies on the fishing and rubber tree industries are a major problem for local workers. Fishing workers are now being told to curb their fishing to bring Thailand into line with international standards, restricting the number of days that can set out to sea. For rubber plantation owners and workers, the rubber price keeps plunging.

The PM ended up in a few local slanging matches during his public appearances, firing back a few insults at hecklers who were trying to raise points with General Prayut. The Thai PM has since apologised for his outbursts. 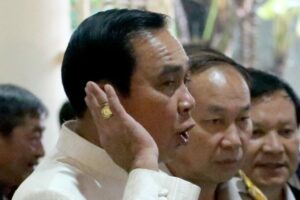 A ship carrying wind turbine poles heading to Ayutthaya sank in the Chao Praya in Nonthaburi province yesterday after its captain took on water in an attempt to pass under a bridge.

The captain says that when the boat neared the Nonthaburi Bridge, the poles were too high for the boat to go under, so he decided to pump water into the boat to lower it into the river. However, too much water was pumped into the boat and it kept sinking. Salvage efforts are expected to start tomorrow. 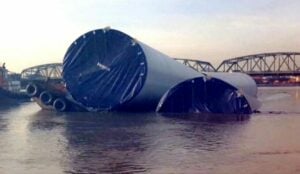 Super Moon on the way Sunday

The biggest Super Full Moon for the year will this Sunday.

The director of the National Astronomical Research Institute says next week’s phenomenon occurs when the moon’s orbit is closest to the earth, and will be a mere 357,973 kilometres away. The distance is about 14 per cent closer than when the moon is farthest from earth.

The moon on Sunday will be brighter than normal, that’s if you get to see it. Forward forecast for Sunday says there will be a 90% chance of rain. 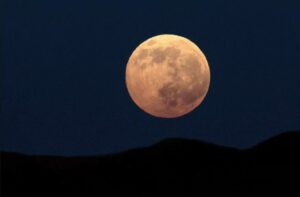 The Thai Embassy in Jakarta says it’s helping 46 Thai tourists return from Bali via Surabaya airport as flight services remain suspended at the International Airport in Bali with flights cancelled due to the Mount Agung eruptions.

Hotels in Bali are offering free stays for one extra night and then 50 percent discount for the next day for tourists whose flights have been canceled or for those who are forced to extend their stay. For international tourists, the Immigration Office is granting one-month visa extensions to those who are affected. 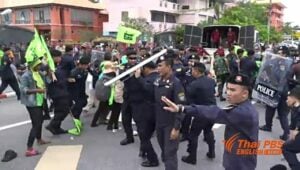 Songkhla provincial police are seeking court warrants for the arrest of over 100 protesters against the Thepha coal-fired power plant project on charges of traffic disruption and obstruction of police.

Police yesterday arrested 16 protest leaders after over 100 protesters tried to breach police cordon to submit their petition to PM Prayut Chan-o-cha who was scheduled to visit Kao Seng fishing community in Songkhla yesterday during a mobile cabinet meeting.

The court approved detention of the 16 protesters, but one of them, who is a 16-year-old youth, was released on 9,000-baht bail. The other fifteen protesters have been sent to Songkhla Central Prison. 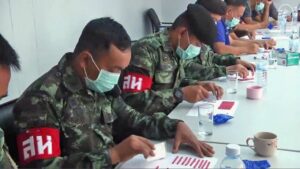 And on the list of things you are unlikely to find on the side of a road… add this one to your list. A total of 84,000 “yaba” amphetamine pills were found on a roadside in Kalasin.

The drugs were found inside a fertiliser bag under a roadside tree in Tambon Nong Waeng.

Police believe the drugs were smuggled in from the border by a drug trafficking gang that managed to escape in a car. Police speculate the gang might have dropped the drugs there during their escape. We’d like to see the gang’s faces when they return to find their missing booty.

Morning Briefs are compiled in conjunction with The Nation, Phuket Gazette and VOA.