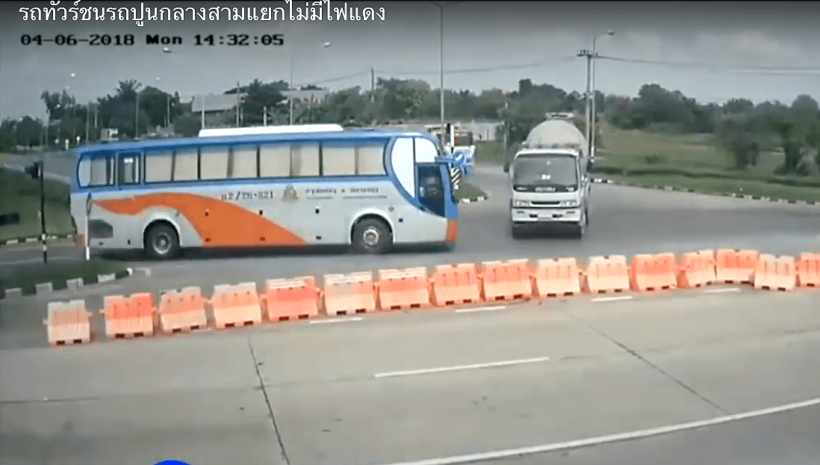 20 passengers on a Nakorn Panom-Bangkok bus are shaken but unharmed following a tour bus crash with a concrete truck.

A report from MCOT shows CCTV footage from an intersection in Khon Kaen of the two vehicles colliding. The footage shows cars coming through the intersection then the cement mixer. The cement mixer didn’t appear to give way to the right and the bus also seems to be travelling at high speed.

The intersection is in the Ban Phai area on Mitraphap Road, Khon Kaen where there are no lights.

The driver of the tour bus, 44 year old Somsak Janpho, has been patting himself on the back claiming, but for his swift actions, the passengers on the bus could have been badly injured or killed.

The driver of the cement mixer has been taken to the local Ban Phai Hospital for observation where police have been questioning him.

The 20 passengers were still in a state of shock when emergency responders arrived at the scene of the accident. They were shaken but suffered only minor injuries. One passenger says she heard the driver shout there was going to be a collision. She said the reserve driver had suffered a head injury as a result of the collision.

You be the judge.