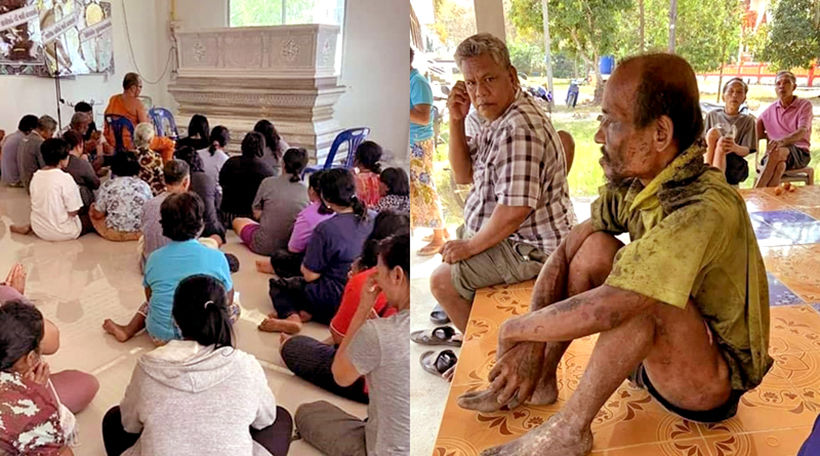 PHOTOS: Ummm, aren't you meant to be dead? - sanook.com

It was the double-take of the year. In the middle of a funeral at a local temple in Nakhon Si Thammarat, southern Thailand, the man, who was the main attraction at the event, walked into his own funeral. After attendees got over their surprise, and relief, that their relative was actually alive, the question arose, “who is the person inside the coffin?”

The funeral for Prapad Sanitknam was being held at Wat Thung Yaun Temple in Na Bon District on Friday, January 31.

The ‘dead’ man’s father, Suchart Sanitknam, had been notified that his son had been run over by a train the day before. The man had been walking along the train tracks in the southern province and was killed when the train struck him. The body was unrecognisable as a result of the incident but the man was wearing similar clothing to what Prapad was wearing when he was last seen. The location where the man was hit was also close to Prapad’s home. The body had no ID or documentation when police arrived on the scene.

Getting the funeral underway on the next day, Prapad casually walked into the temple to pay respects to the deceased, unaware that everyone attending thought that he was dead. After welcoming Prapad back to the world of the living, the family went to file a report at the Chawang Police Station. Then the attention turned to the body in the coffin. Who was in there?

The family reported that Prapad had a history of mental illness. When he strolled into the temple he was wearing old clothing and “hadn’t showered for days”.

The police say that the incident is a simple misunderstanding. They report that Prapad looks quite similar to the person who was killed in the train incident and was wearing similar clothing. The body has now been moved to Wat Chan Di Temple. Another family has now been told of the sad passing of their relative.