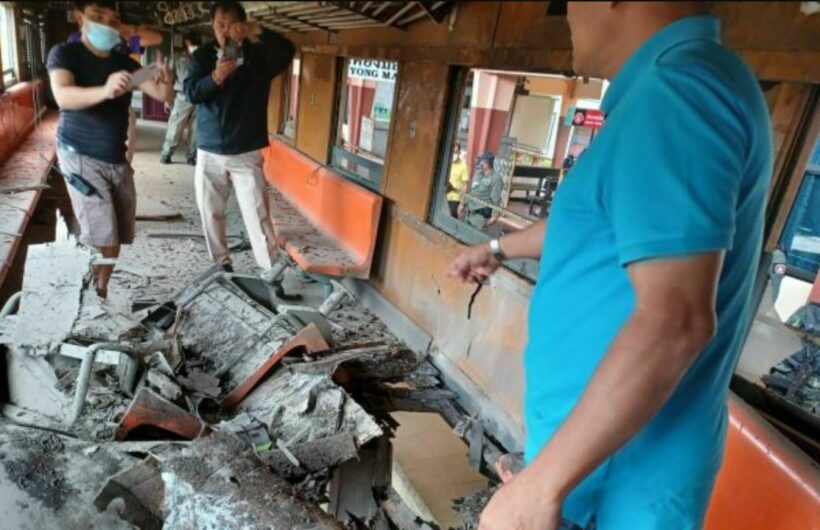 This afternoon a bomb exploded on a train bound for Bangkok as it was departing the Deep South province of Narathiwat. The explosion rocked a freight car, obliterating the wooden floor of the train and spilling its cargo onto the runway.

The train had departed the Su-ngai Kolok district of Narathiwat heading for Bangkok,  and had only travelled about 40 kilometres when the bomb detonated at around 12:30 pm. The explosive device is believed to have been stashed in a freight car with boxes of fruit.

Attacks by local insurgent groups including bombings are common in Thailand’s deep south where separatists have battled for decades, but violence has increased in recent years.

The train was approaching the railway station at Tanyongmas when the bomb went off. The train car was damaged, but the train was still operable and the drove made it to the station. Police were contacted and officers and troops hurried to the station to inspect the damage and investigate.

Police reported that no one was injured in the incident, but revealed more details. An unknown gunman also shot at the train, but no one was hit. No further details about the gunfire were released.

The train is a special service route specifically set up to transport fruit to Bangkok from Narathiwat. The State Railway of Thailand has had to suspend the train service due to the bomb attack, which is damaging to the orchard owners in the area. As fruit suffered from a big price drop, the train was arranged to carry excess fruit to Bangkok to be sold there.

As a precaution, all train stations in the Deep South will have security increased.

Rain
Here we go. This might distract us for about five minutes.  Though, I've noticed of the last year, their strategy towards Thai institutions and infrastructure is much more humane than previous campaigns towards everyday innocent populations.
Graham
Certainly not a freight car in the picture, come on people, get it right.
Stonker
Only a freight train, but that's a change of target and tactic which should be a bit worrying.