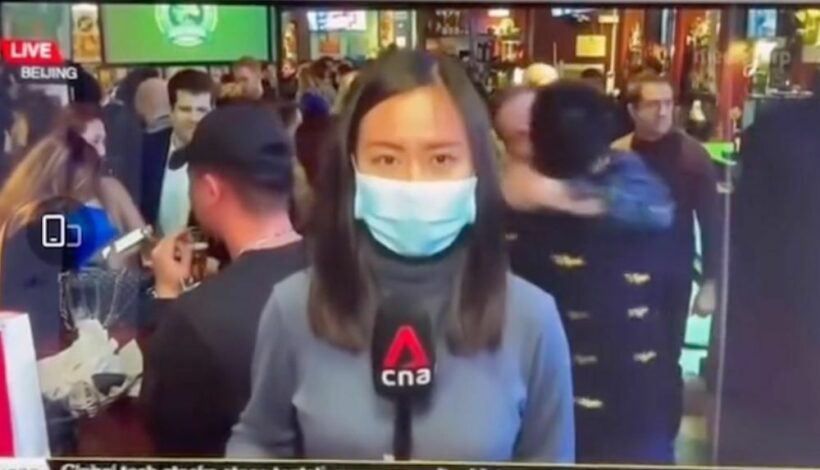 In a Singaporean news broadcast on the Winter Olympics, it wasn’t the coverage that got the attention of viewers, it was what was happening in the background at the Beijing bar. Behind the Channel News Asia correspondent were two men passionately kissing, a taboo for Singaporeans where broadcasting laws prohibit LGBT content and homosexual relationships between men are illegal.

Although the kiss was removed from a version on CNA’s website, a video of the kiss has been seen over 825,000 times on TikTok and a popular Chinese social media network Weibo. One TikTok user wrote “This is actually an act of revolution”.

It was the look given by one of them who posed directly to the camera post-kiss has caught many people’s attention, according to a representative of Kaleidoscope NTU, a group formed by students at Nanyang Technological University to raise awareness of discrimination on LGBTB rights.

“We don’t know who this guy is, of course … the joy that comes with being able to show off your partner and the confidence in getting to be yourself as well, the combination would have naturally spoken to a lot of queer people within the country as well”.

Now activists have pointed out the obsolescence of Singapore’s laws since the video has sparked outrage in the city-state where LGBT rights are terribly backwards as its IMDA’s Internet Code of Practice indicates any material believed to support homosexuality is prohibited on television broadcasts.

In China, where same-sex relationships were decriminalised in 1997, same-sex marriage is still illegal and the LGBTQ+ community continues to experience discrimination and censorship.

China’s broadcasting laws have failed to rule the media consumed by younger generations as they are viewing YouTube and online streaming services instead of watching free-to-air television, according to an LGBT rights activist from, Young Out Here, Benjamin Xue. He warned that the disconnect between online and local television could contribute to a widening division in ideas among younger generations.

“They are coming out a lot younger these days”.

Election campaigns kick off in the Philippines, Marcos Jr. a favourite