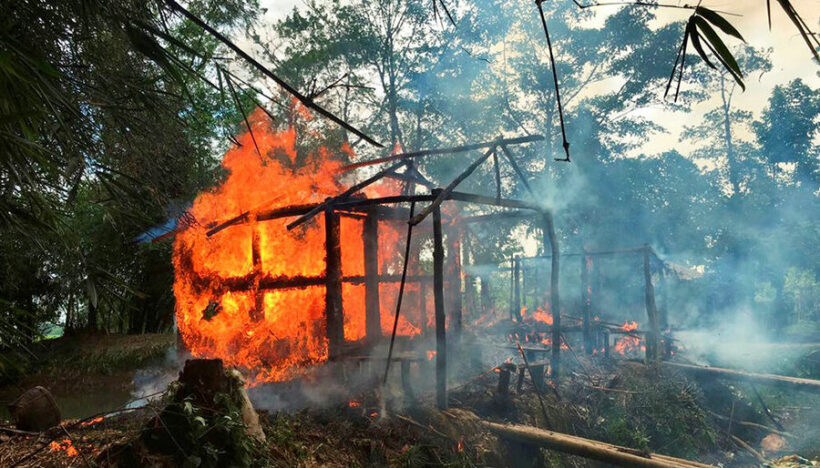 2 army deserters from Myanmar have testified on video to the ritual slaughter of the country’s Rohingya Muslims, by order of the nation’s military – the Tatmadaw. 33 year old Myo Win Tun and 30 year old Zaw Naing Tun, are now believed to be in the custody of the International Criminal Court in the Netherlands, after fleeing to Myanmar’s border with Bangladesh and asking Bangladeshi officials for protection. The ICC is currently conducting an investigation into alleged atrocities committed against Myanmar’s Rohingya population by the ruling military junta.

There has been widespread reporting and condemnation of the Tatmadaw’s ‘atrocities in the past – all strenuously denied by Burmese leadership.

In separate videos, each of the soldiers speaks to camera and details the shocking nature of the carnage. The videos have been posted on the website of Fortify Rights, a human rights group focused on Myanmar. It’s believed the testimonies are the first from actual Burmese soldiers, and could contribute valuable evidence to the international investigation, which is expected to last years.

Fortify Rights says both men have provided the names and ranks of 19 army members, including themselves, they say were directly involved in committing or ordering the atrocities. The story has been reported by the Associated Press, which says that, while it is not possible to verify the soldiers’ stories or know if they were testifying under duress, the accounts do match those already documented by UN agencies and human rights groups.

Over 700,000 Rohingya Muslims are now believed to have fled to Bangladesh since August 2017 to escape the campaign of terror being waged against them. The official line from the Burmese military is that it is a clearance campaign as a result of an attack carried out by Rohingya insurgents in Rakhine state. The government consistently denies that any mass shootings or rapes, or the burning of thousands of homes, has ever taken place. The testimony of the two former soldiers appears to contradict this.

Myo Win Tun says that on entering Muslim villages, his commander, Than Htike, would give the order to, “shoot all you see and all you hear”, adding that in one village, they murdered and buried 30 people, including, “8 women, 7 children and 15 men and elderly.” He says men were shot in the forehead before being kicked into a hole, while women were raped prior to being murdered. He admits to raping one woman himself. He says soldiers also stole mobile phones and laptops, as well as cattle.

In a 2nd video, Zaw Naing Tun says he was part of a unit that wiped out 20 Rohingya villages, killing 80 people, including children and the elderly. He says the murders were ordered by his commander, Myo Myint Aung. On one occasion, 10 villagers suspected of belonging to an insurgent group were tied up and shot dead. He says an army sergeant and a corporal raped 3 Rohingya women while searching their homes. He says he did not rape anyone but admits to being involved in looting and stealing from a marketplace.

“We entered into the market, destroyed locks and doors, and then we took money, gold, clothes, food and mobile phones.”

The ICC has declined to comment on the videos while the investigation is ongoing, but Matthew Smith from Fortify Rights says the testimonies prove what has long been known about the regime in Myanmar.

“These confessions demonstrate what we’ve long known, which is that the Myanmar army is a well-functioning national army operating with a specific and centralised command structure. Commanders control, direct, and order their subordinates in all they do. In this case, commanders ordered foot soldiers to commit genocidal acts and exterminate Rohingya, and that’s exactly what they did.”

Fortify Rights is urging the ICC to try both men and then enter them into a witness protection program in exchange for their testimonies.