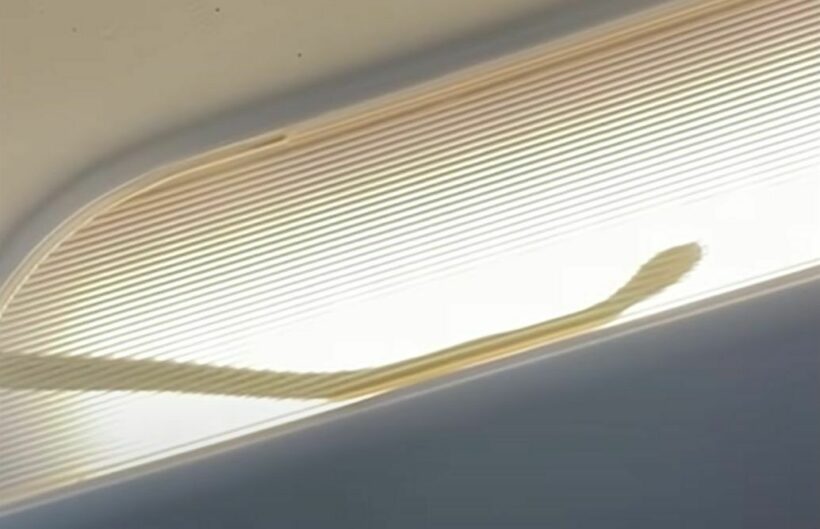 Like a scene of the cult-classic Samuel L. Jackson film “Snakes on a Plane,” (but far less dramatic), a snake slithering loose in an AirAsia passenger airplane led the pilots of the Malaysian budget carrier to detour from the scheduled route and make an emergency landing.

A video from the aircraft’s cabin shows the silhouette of a long snake slithering in the overhead lights. Reports do not say if the snake was someone’s pet, or if it had slithered onto the aircraft itself, but a report from AFP says the aircraft was to be fumigated.

AirAsia says the lead pilot “appropriate action” when he found out about the snake after taking off from Kuala Lumpur and landed in Kuching, 900 kilometres west of the destination Tawau. Passengers then boarded another aircraft for the rest of their trip. Everyone on the flight, both crew and passengers are safe.

A snake on a plane is “very rare,” but it does happen from “time to time,” according to the airline’s chief safety said in a statement to the media.

AdvocatusDiaboli
1 hour ago, Thaiger said: Like a scene of the cult-classic Samuel L. Jackson film “Snakes on a Plane,” (but far less dramatic), a snake slithering loose in an AirAsia passenger airplane led the pilots of the Malaysian budget carrier…

Noble_Design
Guevara
3 hours ago, Jason said: Windscreen "vipers"..... get it? 🤣🤣🤣. Adder 'joke ' like that and you will be disciplined.

Dedinbed
6 hours ago, Thaiger said: airplane A Boeing Constrictor maybe .. They should've had a bit of Monty Python on the in-flight entertainment ..