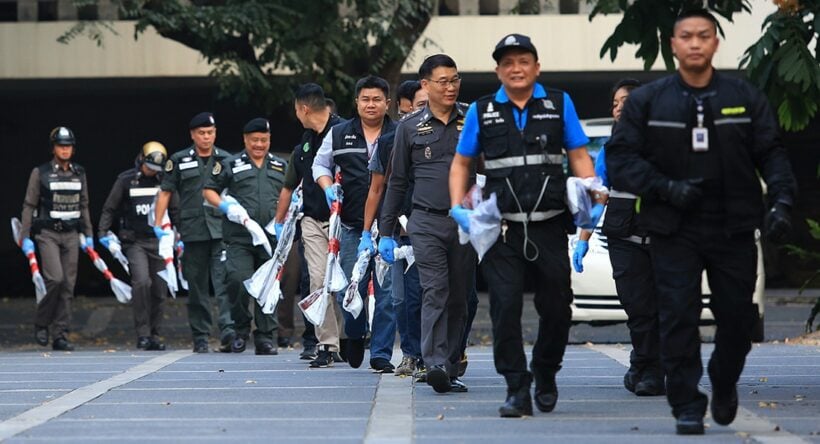 Police have uncovered a cache of weapons as well as four pairs of ivory tusks as they searched a residence belonging to Italian-Thai Development president Premchai Karnasuta yesterday as part of their investigation into the tycoon’s alleged poaching in a wildlife sanctuary in Kanchanaburi province.

The search was conducted simultaneously in six locations, including in the capital at a residential compound in Soi Soonwichai 3 in Huay Kwang district as well as in Ratchaburi, Nakhon Ratchasima and Kanchanaburi provinces, where the three other suspects live. 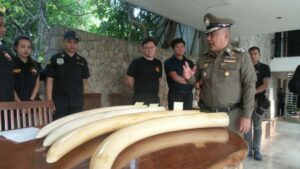 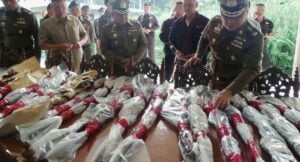 Found at Premchai’s residence in Bangkok were 23 rifles, 13 shotguns, two pistols, 11 rifle scopes and more than 1,500 rounds of ammunition. Police seized the weapons for examination to see if they had any connection with the alleged poaching.

Premchai and his three co-accused were arrested early on Monday at a campsite in Thung Yai Naresuan Wildlife Sanctuary in Kanchanaburi province, for allegedly poaching protected animals in prohibited areas. Confiscated from the campsite were the carcasses of protected animals and rifles loaded with ammunition.
“Those who left DNA or fingerprints on the confiscated evidence will be prosecuted,” said deputy national police chief Pol General Srivara Rangsibhramakul. “All of those who own the guns will also face justice.”

Prime Minister General Prayut Chan-o-cha had instructed police to handle the case honestly in accordance with the law, Srivara said. If any government officials were found to be involved in the poaching, they would also be prosecuted without discrimination, he said.

“The point is, why did the forest rangers not arrest them in the first place once they realised that the group was conducting illegal hunting?” Srivara told reporters yesterday. 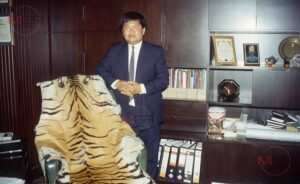 Italian-Thai Development president Premchai Karnasuta poses in front of a pelt from a protected Tiger.

ITD is a major construction firm that has obtained government concessions to build many mega-infrastructure projects throughout the country. The company is also one of the biggest winners of rail-track construction contracts worth several tens of billions of baht. Contracts include the first section of the Thai-Chinese high-speed train project and the Purple Line, Orange Line and Red Line transit projects, as well as the phase-three Laem Chabang port project.

On Tuesday evening, Premchai said the trip last weekend was the second time he had visited Thung Yai. The first time dated back 30 or 40 years ago when Khao Laem Dam, the former name of Vajiralongkorn Dam, was being constructed, he said.
“This time I came here for leisure because I’m old and will eventually die one day. I’m not a regular visitor to the wildlife sanctuary,” the 63-year-old tycoon said in his first comments to the media after he had been released by Thong Pha Phum Provincial Court.

Premchai and three others suspects – Premchai’s driver, maid and close aide – were released on bail on Tuesday. He denied all charges, saying that he was not involved in hunting. However, he briefly told a social media page E-Chan yesterday: “I’m sorry and I might have partly done something wrong.”

The campsite Premchai allegedly used is in a restricted area where hunting and camping are banned. At the site, wildlife authorities found the remains of protected animals including a muntjac deer, pheasant and black leopard, as well as rifles and shotguns that police said were hidden in the undergrowth.
Meanwhile, Damrong Pidet, former director-general of the National Park, Wildlife and Plants department, said he believed more than three people had accompanied Premchai, because the tycoon would have needed someone familiar with Thung Yai Naresuan Wildlife Sanctuary to help him on his alleged hunting trip.

Without help from local hunters, Premchai could not have survived in the thick forest, particularly during the night, Damrong said. As an inexperienced person, he would have needed professional help to stay safe.

The case has ignited criticism, with many people saying the business executive of a leading firm was supposed to abstain from illegal activities.

The SET-listed ITD’s ethical code of conduct cites clearly that it is friendly to the environment. However, the Security and Exchange Commission said the charge is personal and had nothing to do with the administration of the business.

In another development, Thai Animal Guardians Association founder Roger Lohanan said yesterday that he intended to file a lawsuit with Thong Pha Phum police against Premchai and the three others for allegedly violating the Cruelty Prevention and Welfare of Animals Act. 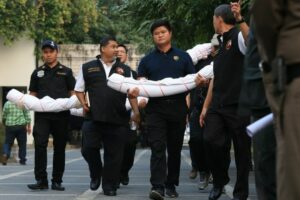 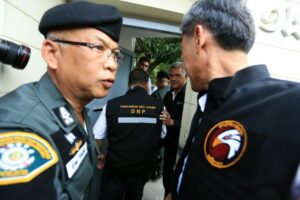 STORY: The Nation and other sources