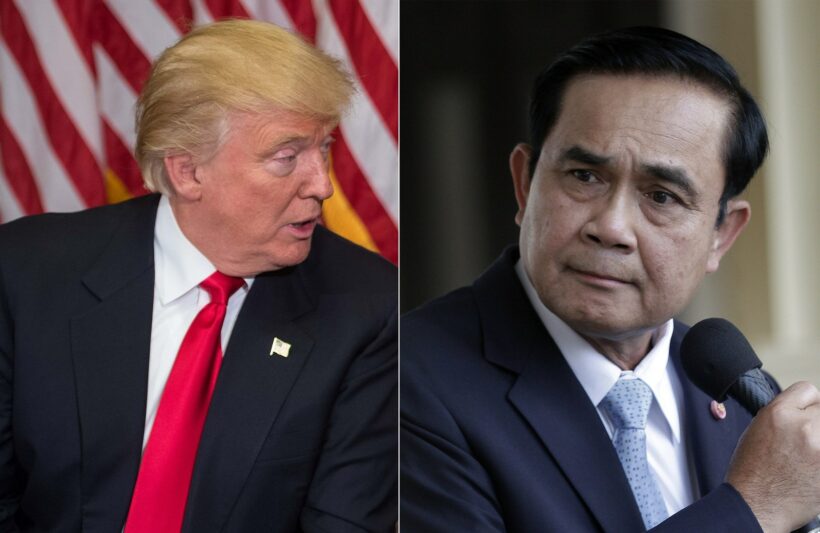 While Thai Government officials have said they will focus on economic matters during a top-level Thailand-US meeting at the White House today, it is security concerns, particularly relating to Thailand’s logistics role regarding the US on rising tensions in East Asia, that should be watched closely, academics believe.

Prime Minister General Prayut Chan-o-cha leads a Thai delegation, dominated by high-level economic officials, to Washington for a three-day visit. Starting today, he will meet with US President Donald Trump, who invited the Thai junta leader during a phone call in April.

Trump and Prayut would discuss ways to strengthen and broaden bilateral relations and enhance cooperation in the Indo-Pacific region, according to a White House statement.

While economic issues such as the Thai trade surplus, intellectual property (IP) and drug patents may be raised again after US Secretary of State Rex Tillerson’s meeting with Prayut in July, the principal significance will be rapprochement between the two countries amid rising regional tensions.

Thanet Aphornsuwan, an expert on US politics at Thammasat University, believes the US might consider the long-term benefits of mobilising military forces in the strategically important Southeast Asia region, in the event of an escalation in tensions.

This could also involve places located near or in Thailand, such as the Strait of Malacca or the proposed Kra Isthmus Canal, Thanet said. “Whatever Thailand decides or does to affect these areas, the US will tend to be interested and take part in,” he said.

The US might make deals not only to ensure its security in these hotspots but also to revitalise a strategic partnership status with Thailand, which since the 2014 coup has leaned towards China, the dominant power in East and Southeast Asia.

Thailand’s close relationship with China already includes that country’s One Belt One Road initiative, which has offered the Kingdom several projects, including the potential construction of the Kra Isthamus Canal and the high-speed rail line, said Naresuan University lecturer Paul Chambers.

While Trump’s administration points to bilateral interests, its decision to withdraw from the Trans-Pacific Partnership and cut assistance to developing countries had only served to move Thailand closer to China, Chambers said.

Nevertheless, Trump’s emphasis on greater collaboration in economic matters, as well as mutual geopolitical interests, while putting aside human rights concerns, should encourage Thailand to push for enhanced trade and investment cooperation, he said.

“For Prayut especially, the visit marks a personal victory of legitimacy for a coup-born PM who was regularly criticised by the [Barack] Obama administration,” Chambers added.

Prayut’s visit to Washington has been viewed as a turning point for relations between the two countries since they soured following the 2014 coup.

“The most important aspect of this visit is that it is a turning point in the relationship after the two countries had almost have no formal contact over the past few years,” said Kobsak Pootrakool, vice minister for the PM’s Office Minister.

“US investors may feel more comfortable about doing business with Thai counterparts and the US government welcomes the Thai government,” said Kobsak, referring to the relationship being downgraded following the coup.

Somkid said the two sides agreed to establish a committee to look at market openings for US pork.

Thailand also proposed that a dialogue mechanism be put in place to help the parties strengthen future cooperation.

Somkid invited US investors who accompanied Ross to invest in the Eastern Economic Corridor (EEC) initiative and he planned to meet US businesspeople in Washington.

IP protection is another matter expected to be raised at the Prayut-Trump meeting. A source said the Commerce Ministry had prepared information relating to the progress of Thailand’s efforts to address IP-related issues, including a crackdown on counterfeit and pirated goods.

The US still has Thailand on its so-called Priority Watch List, claiming inadequate and ineffective IP protection in the country, while demanding a fair and equitable market access in Thailand.

The Trump administration has also launched an investigation into the US trade deficit with Thailand. For its part, the Thai government hopes the US removes Thailand from its Priority Watch List and restrains from trade retaliation.