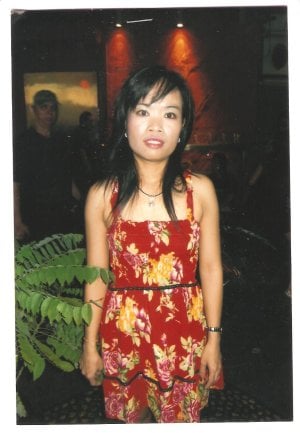 Phuket City Police Superintendent Wanchai Ekpornpit this afternoon confirmed the identity of the suspect as 36-year-old Ronald Fanelli, a US citizen.

Mr Fanelli was arrested at his home in the Thanthong Village housing estate in Chalong at about 6pm last night.

The arrest followed a lengthy and painstaking investigation that involved many hours of tracking the suspect’s movements.

Col Wanchai declined to go into detail about the motive, but said it appeared to have been related to the fact that Mr Fanelli’s sexual preference was for ladyboys and that Ms Wanphen may have been ‘tracking’ his efforts to find partners.

Mr Fanelli, described as a long-term tourist, had lived at a home in Chalong with a Thai woman until the woman and her son returned to her home in the northeastern province of Mahasarakham, Col Wanchai said.

The victim’s mother, 59-year-old Sa-ard Maliwan, told the Gazette from her home in Petchaboon province that she was informed of the arrest at about 9am today.

Ms Maliwan said she was overcome with rage when informed of the arrest and said she hoped the American gets capital punishment for his crime, if found guilty.

She said she was not requested by Phuket Police to come to the island and has no plans to do so.