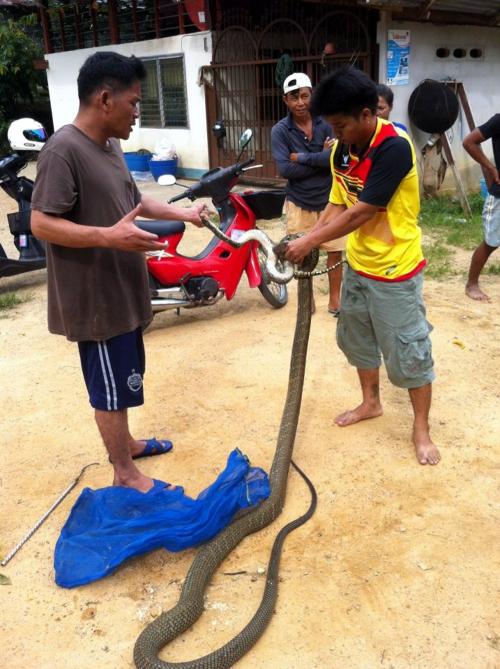 PHUKET: A huge king cobra about five meters long was captured while attempting to swallow a baby python on Tuesday morning in a fruit plantation off Patak Road near Karon.

“Mr Yo, a Burmese man who lives in a labor camp in the fruit plantation, saw the king cobra first,” said Wisit Chuanchit, a villager who witnessed the snake-on-snake incident.

The king cobra was attempting to swallow a one-meter long python at a stream near his house. Mr Yo said he heard an unusual noise from the stream and went to see what it was.

Frightened, he ran to report to nearby villagers, said Mr Wisit.

The villagers then contacted a snake show establishment in Chalong, and asked them to come nab the king cobra.

“Snake-show staff soon arrived and were able to collar and separate the two snakes in five minutes. The baby python was okay. They bagged both snakes and took them to their snake show,” Mr Wisit explained.

The rural area is well-known for the large size of its cobras, he said.

“Villagers are used to seeing huge cobras around here and are quick to call snake-catchers, because the elderly in the village believe the serpents bring bad luck. But the snakes are just going about their normal business of hunting for food,” he said.