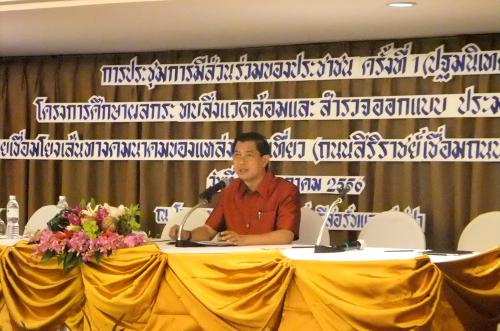 About 100 people turned out to join the meeting, held at the Phuket Graceland Resort and Spa in Patong.

“Actually there is already an old road that villagers use from Sirirat Road to Muean-Ngern Road, but it is just a dirt track. It is not safe for people to use,” explained Songjit Sappakit of Phisut Technology Company, hired to come up with preliminary plans for the new road.

Mr Songjit proposed three plans for the road, which will extend about 2.3 kilometers.

Plan 1: one lane each way, with a 2.5m-wide footpath on either side and two viewpoints en route.

Plan 2: one lane each way, with a 1m-wide footpath and a 2m-wide bicycle lane on both sides of the road; and two viewpoints en route.

Plan 3: one lane each way, but the footpath and bicycle lane will be on the southern side of the road only and each will be only one meter wide – but the road will come with two viewpoints and be lined with pradu trees (narra trees).

When Patong Mayor Pian Keesin announced plans for the new road in April last year (story here), expected costs did not exceed 4 million baht. No estimates of costs were given for any of the plans proposed yesterday.

Mr Songjit supported the third option, saying, “This road will have two viewpoints with pradu trees lining the road, so people looking back at the road from afar will see a path of yellow flowers meandering through the jungle. The road itself will become a tourist attraction.”

Unlike some other main thoroughfares on the island – such as Phang Muang Sai Kor Road (literally “Town Planning Route B Road”) in Patong – a name has already been suggested for the new road: Preuksachart Road, meaning botanic road.

“We would like to see bicycle rental shops at each end of the road, so tourists can rent pushbikes and enjoy the ride along the scenic route,” Mr Songjit added.

“However, I’d like to see this road include access to Freedom Beach [on the south side of the headland]. Right now the only way for tourists to get to Freedom Beach is by either a dirt track or by boat.

“I’d also like to see the bicycle lane expanded from one meter wide to three meters wide,” he said.

“But there must be CCTV cameras all along the route to ensure tourists’ safety, and we must include measures to prevent landslides along the hills,” Mayor Pian added.

Rachin Thongmakkul, president of the Patong Hotels Association, agreed that Plan 3 was the best and supported Mayor Pian’s suggestion of making the bicycle lanes wider.

“I hope to see more than tourists use this road. Local residents can use it as a way to exercise,” he said.

“I’d also like to see several police checkpoints along the way to ensure public safety on the road,” he added.

“High-quality cameras allow us to zoom in on suspects’ faces, making it much easier for us to identify and catch them,” he said.

Maj Ekkarat also urged engineers to ensure that any curves along the new road were not too sharp and to line the new route with safety barriers.

“We don’t want tourists accidentally flying off the road,” he said.

As with all public projects, the proposed new road must pass three public-feedback hearings as mandated by Environmental Impact Assessment (EIA) regulations.

The next two hearings for the new road will be held in September and December, Mr Songjit said.