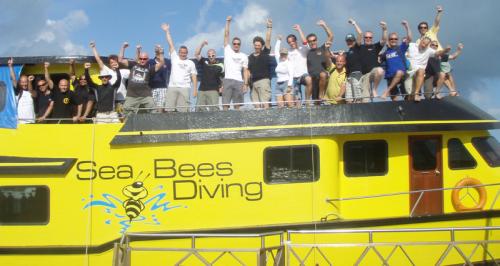 Sensing that the net would cause serious, lasting harm to the reef, Go Eco Phuket

organized about 25 dive volunteers from over a dozen dive companies.

“We’ve got to keep places like Shark Point healthy because, as it has been reported in the media, the degradation of Thailand’s coral reefs nationwide is a problem now. We need to hang on to what we’ve got,” Go Eco Phuket organizer Kerry Leach told the Phuket Gazette.

To support the initiative, Similan Queen Diving Center and Sea Bees volunteered their dive boats for the day, providing free air, Nitrox and food for volunteers.

However, to the group’s surprise the amount of netting pulled from the reef was significantly less than what was seen in the video.

Go Eco Phuket organizer Narong Chaimo explained that it was very likely that the fishing boat had returned to reclaim as much of the net as possible due to its value.

Nonetheless, dive teams made a second dive on the site to search for more nets. During their dive, volunteers spotted several fishing traps, said Vince Moy of Kiwidiver.

“You’ll find that if the breeding grounds are left alone, the regions around those areas have more plentiful and bigger fish,” Mr Moy explained. “We all have to eat, so it’s just a very difficult balance between feeding mouths and [preserving] nature.”

Some of the debris uncovered by Mr Moy’s team was left in the ocean as an artificial reef.

“It was an old fishing cage that had collapsed in on itself. It was no longer acting as a trap for the fish and the cage had effectively become an artificial reef. It had big oysters on it; it had lots of barnacles; and there was soft coral growing on it. It was actually becoming a house for marine life, so it was better to leave it in the water than take it out,” Mr Moy explained.

Thomas Schray, one of the Sea Bees’ staff members that captured the net on film, was pleased with the final results of the day.

“I’m really glad that it happened so fast… We were all very sad that we found it [the net], because Shark Point is such a wonderful, stunning reef. But the reaction we got from our boss gave us a very good feeling,” Mr Schray said.

Despite having been beaten to the majority of the lost net, Mr Narong and Ms Leach felt that the project was a success.

“It has highlighted the problem. We need to let people know this [fishing in the marine national park] is going on,” Ms Kerry said.

Fishermen need to keep their distance from the reef, she said.

Asked about saving Thailand’s reef systems, Mr Stewart said, “It’s never too late, you can always turn something around.

“We’ve done some irreparable damage for sure. There are some things that are extinct or close to extinction, which will only live in aquariums from now on. But you can always protect what is still there.”

Thai skipper sails Sansiri into the lead at TRANSPAC