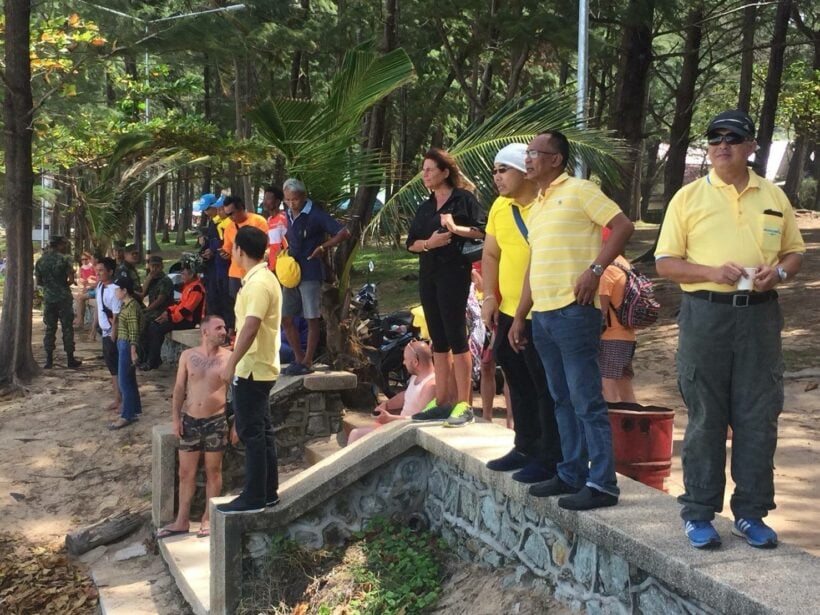 (cue dramatic music and slow-motion shot of team walking down Nai Harn Beach, probably with their shirts off)

The ‘Crocodile Hunters of the Tapi River Basin’ have arrived in Phuket to save the day as they help track down a 1, 2 or 3 metre reptile that’s been getting a lot of media and local authority attention but, so far, has been playing hard to get.

The team from the Freshwater Fisheries Suppression and Prevention Centre in Surat Thani call themselves Kraithong Loomnam Tapi.

Kraithong is the hero of a folktale originating in Phichit, north of Bangkok, who rescues a young woman from the evil clutches of the magical crocodile king Chalawan and slays the reptilian villain in battle.

Kraithong Loomnam Tapi arrived on the scene at 3am yesterday (Friday) to join the ongoing hunt for the crocodile that’s been sunbathing on Nai Harn and Yanui beaches, frolicking in the surf and forcing the closure of the beach to swimmers.

About 40 Tambon Rawai municipal workers and other officials have been looking for the beast since the first sighting on Wednesday (July 18). But Kraithong Loomnam Tapi leader Nikhom Suksawat suggested a change to the strategy.

They went into the water with fishing nets and then waded back ashore in a bid to snag the croc. In the first attempt, they came across the animal, but it was too fast and got away. This went on for another three hours and still no result. Nikhom says the croc needed to tire so they could get close enough to chase it onto the beach. He’s got other tactics in mind to pile the pressure on and wear the reptile out.

Their prey appears to have done what crocodiles do in the meantime: The carcass of a large fish washed ashore during the morning with clear signs of being gnawed by a crocodile.