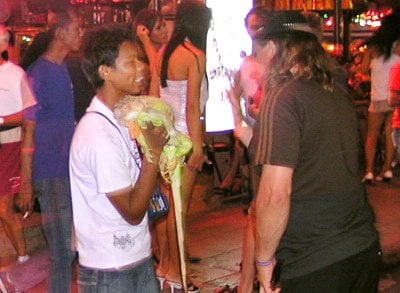 For years iguana handlers have made a living in the area by having tourists pose with the reptiles and snapping pictures of them for a charge.

Other animals used for this purpose over the years by ‘photo touts’ have included gibbons, pythons and sea eagles.

Although the law carries stiff penalties for illegal possession of wildlife – with up to four years imprisonment possible – enforcement has always been sporadic in Patong.

There have also been incidents of violence between tourists and iguana handlers, including the stabbing of a Syrian tourist in October last year.

Soon after taking up his post in February, Col Arayaphan ordered a crackdown.

All iguana handlers were arrested and the reptiles have been turned over to a government wildlife conservation agency, he said.

“After Songkran I will talk to them about having staff who try to physically pull tourists into their bars,” he said.

The tactic is a long-standing practice used by bar hostesses in Patong and other parts of Thailand with tourist-oriented adult entertainment.

AFC Cup football match to be played in Phuket