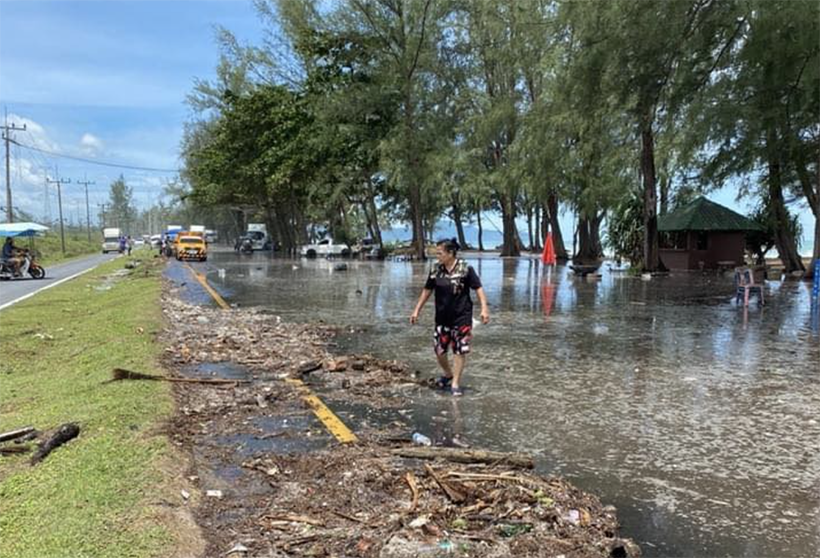 There will be a tsunami evacuation drill in Phuket’s Thalang district on July 20 after a number of underwater earthquakes off the Nicobar Islands, some 500 kilometres away, increased residents’ fears of a possible tsunami. Phuket tsunami

506 kilometres away from Thailand’s Andaman coast, the Andaman and Nicobar islands were continuously hit by 4.0 to 4.9 magnitude underwater earthquakes for three days. Starting on July 4 at 6am and continuing until this morning, July 6, there were more than 40 tremors. None of these caused any damage or changes to the seawater levels.

People who live in Thailand’s coastal areas would receive warnings if there was ever another tsunami. The warnings come from a number of detection warning systems, even though the 2 main tsunami warning buoys, strategically located in the Andaman Sea, are currently offline. The announcements would be broadcast in 5 languages: English, Thai, Japanese, Chinese and Russian.

The first warning would include information on the earthquake’s magnitude. The second warning would urge people to prepare for an evacuation. Depending on where the underwater quake eventuated, and its magnitude, residents along Thailand’s Andaman coast would have 30 minutes – 2 hours warning time.

The Phuket governor confirmed that he had given instructions to the provincial disaster prevention and mitigation office, the deputy governor, Anuparp Rodkwan Yodrabam, and other organisations, to keep a careful eye on the situation.

They were tasked with making sure that the team, construction crews, and equipment were prepared to respond in the event of another tsunami. The 2004 Boxing Day tsunami along the Andaman coast was the first in recorded history in the area. A total of 8,212 people either died or went missing in Thailand on December 26, 2004.

“We have been prepared for it since Phuket people experienced the tsunami in 2004. We can’t be complacent. What is of high importance is the safety of the people.”

According to the Chief of the Phuket disaster prevention and mitigation office, a strong southwest monsoon, a lot of rainfall, and a king tide caused sea waves to wash across low-lying roads in a few locations along Phuket’s west coast on Sunday afternoon, July 3.

“I can assure you that the high tide had nothing to do with a tsunami. For a tsunami to form there must be an earthquake with a magnitude of seven or more on the Richter scale along the Nicobar fault line. The National Disaster Warning Centre closely monitors all factors which may lead to earthquakes and a tsunami.”

There are 19 warning towers located all across Phuket, and every Wednesday at 8am, the national anthem is played to test them.

Vigo
Does the Phuket  have an operating  tsunami warning system? Last time I was in Phuket  a few years ago, the system was  not in working order. Did they fix it?    When they have this drill, does this mean the…
thaicm
I guess the assumption is nothing will happen for at least a couple weeks.  I hope they're right...
Toots
I have lived in Naiyang for over 12 years , evacuated to Tesco Thalang on the last tsunami warning in 2012.  Since then our warning towers  in this area are tested hap hazzard,.  Yes we had a test on Wednesday…

palooka
JULY 20 tsunami drill -- don't think I would like to be arriving by air that day thank you.
Train
Just been there. No information or warning about the risk or to stay away from the beach. The escape route don't work in time, buoys don't work. Luckily it doesn't happens again.

Army helps repair houses of elderly and disabled in Phuket