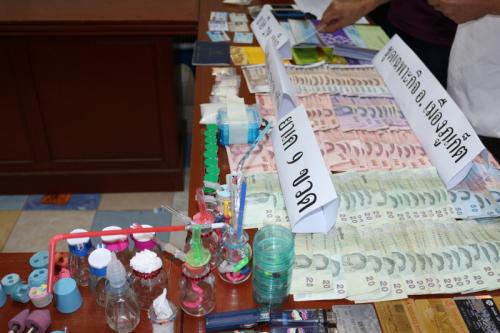 Muang District Chief Supachai Pochanukul told the press today that Siriwat Srisuriyachai, 43, from the northeastern province of Buri Ram, was arrested outside an entertainment venue on Sakdidet Road (map here) in Phuket Town at 11:30pm.

“An undercover officer pretended to buy 1,000 baht worth of ya ice [crystal methamphetamine] from Mr Siriwat and agreed to receive the drugs later,” Mr Supachai explained.

After the handover, officers moved in and made the arrest.

“We searched his car [a Mercedes-Benz] and found 78.78 grams of ya ice, 29 tablets of Ecstasy and nine small glass bottles containing Ketamine,” the district chief added.

During questioning, Mr Siriwat told the officers he once ran a Phuket tour company, but the businesses was shut down after he ran into financial difficulties.

“After that he became a drug dealer,” Mr Supachai said.

“He claims this was his first time selling drugs, and he said that all the drugs he had were delivered from Bangkok to Phuket by bus,” the chief added.

Mr Siriwat was charged with possession, sale and distribution of a class 1 and class 2 narcotics.

“He was handed over to Phuket City Police for further investigation,” Mr Supachai said.