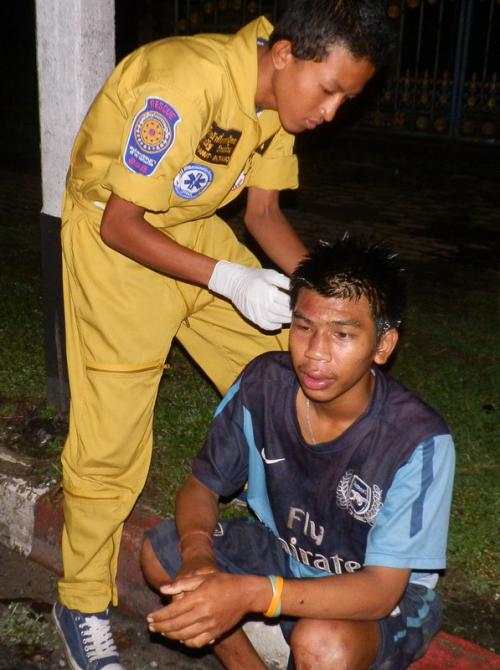 PHUKET: Police are urging motorists to exercise caution when travelling alone late at night in the Thalang area after a man was kicked off his motorbike while in motion and robbed of his motorcycle by a gang of youths late Thursday night.

Chatmongkol Sukmak, 17, was riding home from Phuket Town at about 11pm when a gang of youths travelling on three motorbikes rode up alongside, said Capt Patiwat Yodkwan of the Thalang Police.

“As he was passing Wat Tha Ruea, about 500 meters south of the Heroines Monument [map here], a gang of male teens riding three bikes surrounded him and blocked him in,” he said.

“Two of them kicked Mr Chatmongkol’s motorbike, knocking him to the ground. They grabbed his bag, which has his wallet and his phone inside, and took his bike.

“They rode off northward, toward the Heroines Monument,” Capt Pariwat explained.

Mr Chatmongkol suffered only slight injuries in the fall.

“He had bruises on his forehead and all over his body, but suffered no major injuries,” Capt Pariwat said.

“We are checking CCTV footage in the hope we can gain some clues in order to catch the perpetrators,” he added.