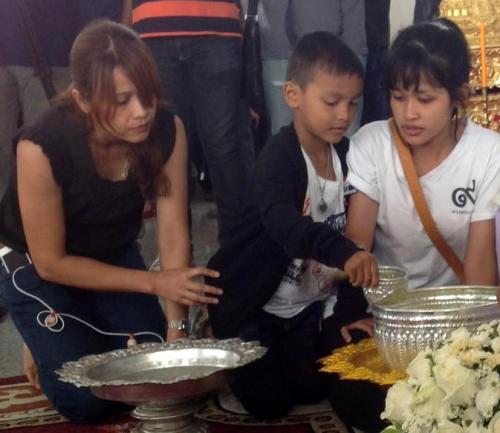 PHUKET: Anti-government protesters will mass at Sarasin Bridge tomorrow night to give a hero’s welcome to the remains of Prakong Choochan.

Mr Prakong, 46, died early Saturday morning from injuries sustained when an explosive device was thrown at protesters during a street march in Bangkok on Friday (story here).

“His body is being kept at Wat Thepsirin in Bangkok. It will be transported to Phuket by road. The ambulance will depart at 7am tomorrow,” Amnuay Kumban, leader of the anti-government protests in Phuket, told the Phuket Gazette.

“We will escort his remains to Wat Ketho in Kathu [map here], where final funeral services will be held.”

Protesters gathered in front of Provincial Hall on Saturday night to mourn the death of Mr Prakong, a taxi driver stationed at the rank in front of the Royal Paradise Hotel in Patong (story here).

“We are devastated by what happened. He was fighting for our country,” Mr Amnuay said.

“We call on everyone to honor his death by wearing black armbands, and we will ask all government offices in Phuket to close as a mark of respect,” Mr Amnuay said. “The government must be held accountable for this.”

Phuket Governor Maitri Inthusut and his wife Mrs Pavinee visited Mr Prakong’s home in Patong on Saturday night to offer their condolences and donate 50,000 baht to the family.

Mr Prakong’s daughter received the donation on behalf of her mother, Tippayao Choochan, who is in Bangkok making arrangements for her late husband’s return.

Anchalee Tephabutra, the longstanding Phuket Democrat MP and a former deputy prime minister under the Abhisit Vejjajiva administration, made a personal donation of 100,000 baht to go toward the education of Mr Prakong’s children.

Mr Prakong leaves behind two daughters aged 22 and 17, and a 7-year-old son.