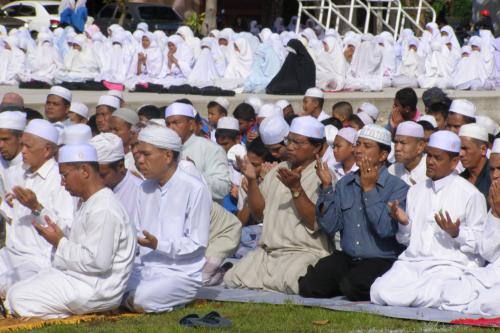 PHUKET: Preparations are underway for one and all to join the “Festival of the Sacrifice” activities to be held at the Muslim Wittaya Phuket School in Koh Kaew on October 15.

The auspicious date of October 15 has been designated as the Islamic celebration of Eid al-Adha, according to esteemed elders, Islamic scholars and astrologers of the Central Islamic Council of Thailand.

Eid al-Adha, also known as the “Festival of the Sacrifice”, is a key religious holiday celebrated by Muslims worldwide and is one of the most important days on the Islamic calendar.

On the international Gregorian calendar, the festival’s date varies from year to year, in accordance with the moon’s movements.

Eid al-Adha is the latter of the two Eid holidays, the former being Eid al-Fitr, which took place over August 7-8.

“Following the sighting of the new moon on the night on October 5, the Central Islamic Council of Thailand has officially announced that October 15 will be Eid al-Adha,” Abdunlo Aemit, a member of the Phuket Islamic Council, told the Phuket Gazette.

Meanwhile, about 100 Phuket Muslims are in Mecca, Saudi Arabia, preparing to attend the two-week long Hajj, which will begin around October 12.

“Hajj pilgrims from around the globe have to be in Mecca before the first day of the last month on the Islamic calender, which this year falls on October 6,” Mr Abdunlo said.

Local Muslims closer to home will be celebrating and observing Hajj-related festivities and rites in Koh Keaw and other Phuket communities with large Muslim populations.

“Every year, we provide access to the football field at the Muslim Wittaya Phuket School [map here] for Muslims to come for prayer and to feast together,” Mr Abdunlo said.

“Last year, more than 400 believers come here during the Hajj. We are now making arrangements for this year’s gathering at the school, and everyone is invited to join us,” he added.

Storms and rain set to continue until Sunday