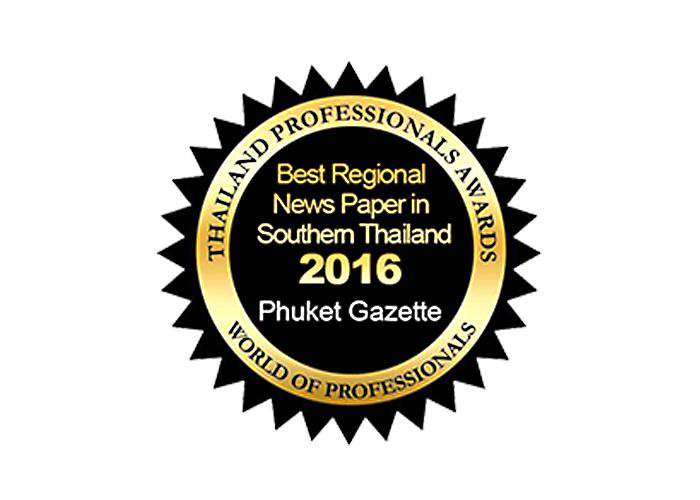 PHUKET: The Phuket Gazette is honored to have been named ‘Best Newspaper in South Thailand’ at the prestigious Thailand Professionals Business & Lifestyle Awards in Bangkok on Saturday night.

The Gazette became a national newspaper in June of last year when it switched to compact format (like the Wall Street Journal, Daily Telegraph, etc) and became an integral part of The Nation, with a circulation of 30,000 copies every weekend, vs the roughly 5,000 it had as a purely local provincial publication in Phuket alone.

“One of the main reasons we moved to compact was that we wanted to reach not only the locally resident international communities all over Thailand – Chiangmai, Bangkok, Pattaya, Samui and Hua Hin, in addition to Phuket – but also tourists at the most effective gateway to the country, which we took to be the airlines,” says John Magee, the paper’s publisher.

“By simply changing the shape and weight of our product, we immediately got several thousand newspapers aboard all 12 major world airlines arriving into Bangkok and/or Phuket every weekend” he said.

Domestically, the Gazette is also aboard all Thai Airways flights between Bangkok and Phuket.

The newspaper was established in 1993 and now offers the Gazette Online, the most heavily trafficked English-language website on the island (Source: Google Analytics); the leading Facebook page here, with more than 130,000 Likes; and PGTV, the well known video production business.

Last week, the company launched Gazette Radio [phuketgazette.net/phuketradio], which, according to its producer Simon Hand, broadcasts “news all day, as well as some of the best jazz, blues and lounge on air.”