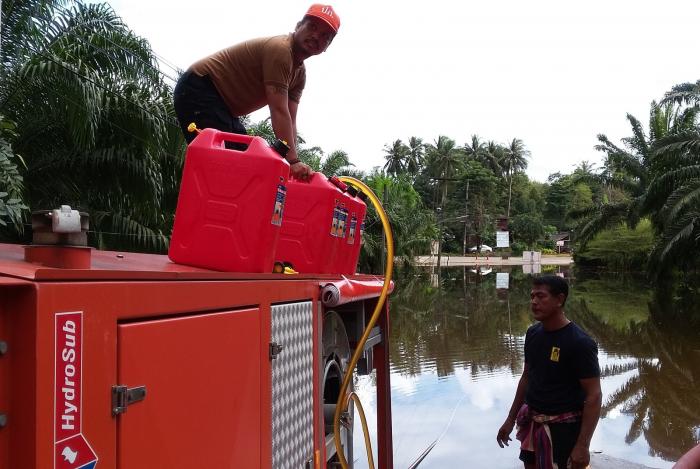 KRABI: The Department of Disaster Prevention and Mitigation (DDPM) Krabi began draining water from about 50 rai of land yesterday morning, after heavy rains in Khao Kram sub-district flooded a mosque, a house and a road in the area.

The water level was measured to be 1.5 meters deep, and sometimes goes up to two meters during periods of heavy rainfall.

“We tried to drain the affected areas as quickly as possible,” said Krabi DDPM chief Paisarn Kunsri. “We only just procured two drainage pumps from DDPM 18 and installed one on Saturday and the other one yesterday.”

Collectively, both pumps can transfer up to 10,000 liters of water per minute.

“It will take about four to five days for the water to be completely drained. Then Muslims in the area will be able to pray in their mosque again – they had to pray outside in tents during this time,” said Mr Paisarn.

At least 20 houses were flooded and 400-500 rai of rubber plantations were affected due to severe floods in Krabi last month (story here).

The month before, villagers in Ao Luek District were hit with floods that submerged more than 300 meters of roads in the area. DDPM officers handed out boats to locals and promised to build a dam as a long-term solution (story here).