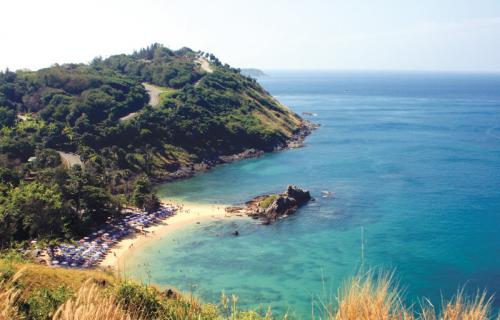 PHUKET: A German-speaking resident of Phuket raised an alarm earlier this week when he noticed that a Buddha image had disappeared from the pavilion at Kata Viewpoint (view here).

However, Rawai Municipality Chief Administrative Officer Rachen Phuntarakit confirmed to the Gazette that there was no need for concern, as the image had only been moved from the scenic view to a more appropriate location at another wat.

“We responded to the many complaints we received from the villagers that the Buddha image had been installed at an inappropriate location.

“It was in a public area frequently visited by tourists who lie down and sometimes even fall asleep in the pavilion during the day.

“At night, homeless people sleep in the pavilion, and occasionally teenagers will sneak into the area to talk and kiss,” Mr Rachen informed the Gazette.

It was unclear to Mr Rachen how the image had arrived in the pavilion and who had put it there.

“The Rawai Municipality didn’t set up the Buddha image. I think whoever brought it here probably came at night, which is why nobody saw them do it,” he explained.

“They could have decided to install it there based on a suggestion from a fortune teller, or perhaps they just wanted to have it in the pavilion so that people visiting Kata Viewpoint could pay respects to it,” he said.

“No matter what the reason, they should have obtained permission first from the Rawai Municipality to erect the image on public land,” he added.

“If they try to put another image there, we’ll know who they are this time, because we have CCTV cameras in the area,” Mr Rachen said.