There used to be one Phuket boat show, then there was two, then there was the two coming together as one… and now there is a new event. Royal Phuket Marina are putting together their own show with Andy Dowden, of PIMEX fame, the principle organiser of the new Phuket Yacht Show. The new show is being planned for January 3-6, 2019, a week ahead of the scheduled ‘Thailand Yacht Show & RendezVous’.

But first a quick history.

First there was PIMEX which was an annual showcase for all things ‘nautical’ held at the Royal Phuket Marina. It was a well-organised show and ran like clockwork under the capable hands of Andy Dowden.

Then along came the Thailand Yacht Show, a bigger show aimed more at the super yacht end of the market and held, in part, to promote Phuket as a destination for super yachts. The organisers, Verventia, under the leadership of Andy Treadwell, were mounting their annual show at the Ao Po Grand Marina. Verventia are also the organisers of the Singapore Yacht Show. It was bold and big but Ao Po is a long way from Phuket’s population centres.

PIMEX was last held in 2016 and in 2017 the event was re-packaged and re-launched as the ‘Phuket Rendezvous’. The event was again held at the Royal Phuket Marina but now organised by the Burlot brothers, owners of Asia RendezVous, organisers of the Phuket, Penang and Singapore Rendezvous events

Earlier this year the Burlot brothers and Andy Treadwell announced that the two shows, the Phuket Rendezvous and the Thailand Yacht Show, would merge

Read about that announcement HERE.

“The move was precipitated by a request earlier in the year from the Tourism Authority of Thailand (TAT) to gather the industry together in one major event in Thailand so as to demonstrate united support for the government’s yacht tourism initiative.”

The boat industry demanded it, the TAT and other Thai funding bodies demanded it and somehow, the Burlot brothers and Andy Treadwell would make it work – they’re all competent business-people and, despite their differences, would mutually benefit, as would the local boating industry, if there was ONE big boat show for Phuket. They’ve both proven that they can mount excellent shows. 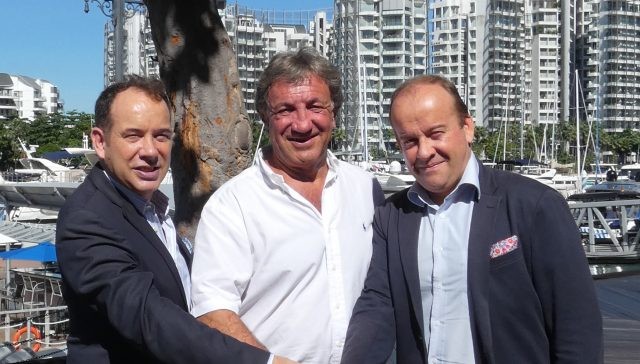 But where would it be held?

Ao Po Grand Marina have been forced to remove a lot of their pontoons that weren’t a part of their original plans so it’s made mounting a big boat show almost impossible. RPM is just too small to handle any of the larger yachts or super yachts.

Also, the Burlot brothers, who mounted the first Phuket Rendezvous, have not signed any contract for the next event at RPM as Verventia and their company continue to work out the best way to work together.

With the months ticking by quickly, and no firm decisions being made about venues, Gulu Lalvani, the owner of RPM, has brought back Andy Dowden to organise their own independent show.

Of course the people that should be calling the shots are the local marine industry players who fund the shows and put up the time and money to display all these luxury craft. They are now going to be torn between competing events again.

Royal Phuket Marina has the space and infrastructure to mount another moderately sized show and has hosted similar shows many times before – with PIMEX and Phuket Rendezvous.

Now we await a response from the newly merged “Thailand Yacht Show & RendezVous” as to where they are going to mount their show for the next season. And the region’s boating industry now has to wrestle again with which of the shows it will support, precisely the situation they were trying to avoid.