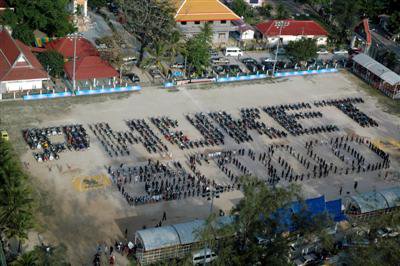 PATONG, PHUKET: Big bike enthusiasts have been enjoying Phuket Big Bike Week 2010, which started with a mechanical roar in Patong on Friday.

Riders will today take a break from the many organized activities and prepare for Songkran festivities that start tomorrow.

Over the past few days, riders have enjoyed concerts, beach parties, beauty and tattoo contests and convoy rides around the island.

Harley-Davidson riders with big bikes from around Thailand have made a typically strong showing however, he said.

Overall about 2,800 registered riders are taking part, down from last year as a result of the Bangkok protests, he said.

“This year there were more family groups coming in by car because of the long holiday. We should have more exact figures by the end of the week after we talk to the hotels,” he said.

Among the objectives of the many events are to promote travel and tourism in Phuket and Thailand; create greater unity for bikers worldwide; promote safer riding (with helmets on heads and lights on bikes) and organize charitable activities to raise funds for schools for underprivileged children in Phuket.

Participants include over 400 motorcycle clubs around Thailand, trade visitors and individual visitors interested in all types of motorcycles.

The event, now in its 16th year, is supported by Phuket Provincial Office and the Tourism Authority of Thailand.