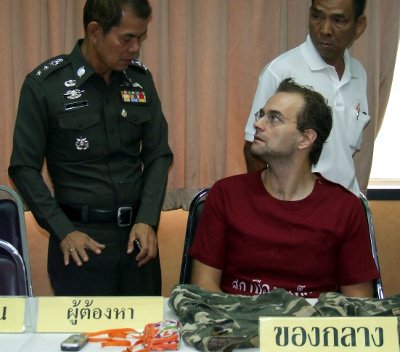 PHUKET: The Phuket Public Prosecutor’s Office will not file an appeal over sentencing in the case of convicted murderer Ronald Fanelli, the Phuket Gazette has learned.

Fanelli, a former US Navy officer, was on November 1 convicted of the June 2010 stabbing murder of Wanphen Pienjai, a hostess at the Sweethearts Bar in Kata.

Fanelli was sentenced to 20 years’ imprisonment on charges of premeditated murder and an additional six months for trying to conceal Ms Pienjai’s body.

The prosecution and defense teams were give until today to appeal. Despite earlier indications that the prosecution would appeal for a stiffer sentence, Phuket Deputy Public Prosecutor Permgiart Bunsung said today that the decision had been made to let the sentence stand.

Mr Permgiart, who prosecuted the case, said he has been informed by Fanelli’s lawyer that she would not appeal the guilty verdict.

The case file has now been forwarded to Phuket Governor Tri Augkaradacha for final approval, he said.

“If he approves our decision not to appeal, the case will be closed and Fanelli will serve the 10 year, three month sentence.

“If he does not approve, the case will be forwarded to the Attorney General’s Office in Bangkok for a final ruling,” he said.

“The decision now rests with the governor, who is not subject to any deadline,” he said.

Mr Permgiat explained that the Public Prosecutor must have the governor’s approval in every case that the prosecutors do not want to appeal, no matter how trivial the case may be.

If Governor Tri approves, Fanelli will serve the 10 years, 3 months, minus time already served. This works out to a release date in mid-October 2020.

The Gazette has thus far been unable to reach Fanelli’s lawyer to get a comment on whether Mr Fanelli would seek a transfer from the overcrowded Phuket Prison to another facility in Thailand, or to try and seek deportation to serve out his sentence in the US.

Transfer out of Phuket Prison would likely be welcomed by Fanelli. During a brief interview shortly before the ruling, he told the Gazette that he had survived an attempt on his life as he slept in his overcrowded dormitory.

During the interview he said he was getting “more and more used to” prison life with each passing day, but that he had a lot of “headaches”, mostly from other foreign inmates.

He had been learning a lot of Thai language and said his comprehension was in the “60% to 70% range”, which often means he called upon to serve as a translator, he said.

Thai inmates seem to accept their fate more readily than their foreign counterparts, many of whom continue to maintain a false sense of entitlement, he said.

“There is one guy who has been in here for three years and he still seems to have no idea what the cement walls and barbed wire mean,” he said.

Asked about the overcrowding problem, he said he had respect for the wardens who had to do their best to deal with every convict assigned to the facility by the Court.

“They don’t know what the solution is. Nobody does,” he said.

Click here to see the video of Fanelli making his confession at a Phuket City Police press conference.

Phuket “floating corpse’ to be buried if unclaimed