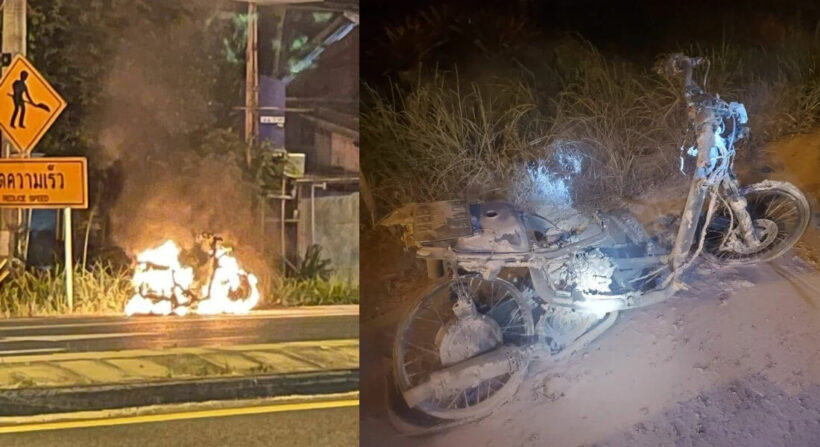 PHOTO: A motorbike catches fire while driving in Phuket. (via Phuket News)

Phuket saw an unusual and spectacular accident when a motorbike caught fire while driving down the road. The accident took place last night on the main road in Pa Khlok around 8 pm and ended in a fiery explosion with the motorbike fully immersed in flames.

Thalang Police responded to a call around 8:15 in the evening while local patrolling police received a report on the 191 Incident Call Centre line. Police arrived at the location of the accident, about 2.3 km east of Heroines Monument on the main road near the entrance of the Baan Suan Yu Charoen 5 housing estate, and the motorbike was still in flames.

The bike was so charred and mangled that, while officers could identify a Phuket-registered license plate, they were unable to figure out what make and model the motorbike was. The man had been riding the bike down the main road when it burst into flames. It appears that he was able to drive the car off the road and escape safely before the engine exploded and the whole bike went up in flames.

Locals who witnessed the event rushed to the motorbike to try to stop the fire but were unable to douse the bike with much water as the fuel exploding kept them from getting very close to the burning motorbike. Though they attempted to extinguish the flames, the bike was completely destroyed.

The police reported that their initial look at the situation pointed to a possible leak in the fuel line that had caught fire, but further investigation will be continued to try to pinpoint the exact cause.

The man riding the motorbike was not named and it was not clarified whether he owned the bike or was just riding it. He was not reported to have any serious injuries, and was treated by rescue workers from the Pa Khlok Municipality Rescue Unit. They administered first aid to the man before transporting him to Thalang Hospital.