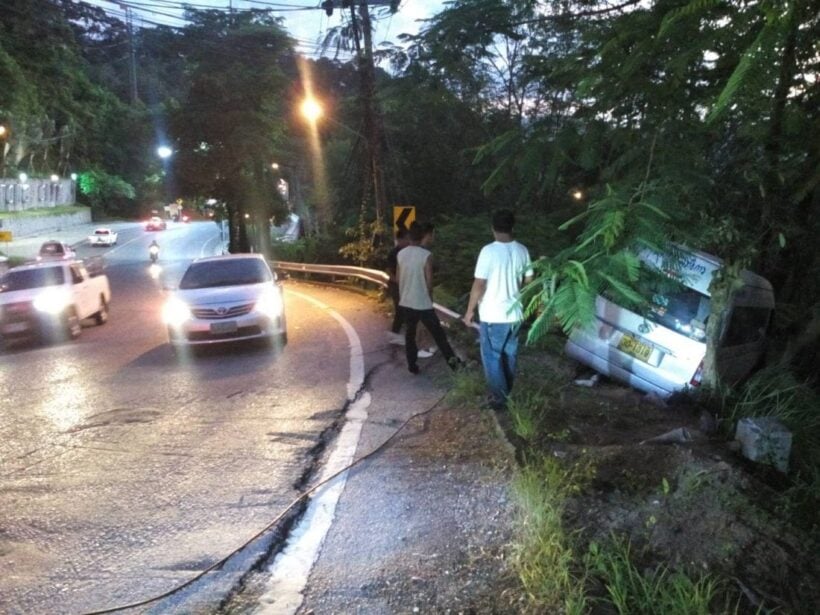 A minivan driver has been seriously injured after allegedly falling asleep at the wheel whilst traversing Patong hill early this morning. (September 11).

Patong Police were notified of the incident at 4.45am alerting them to the crash on Phra Baramee Road near the Patong City sign.

Police and Kusoldharm rescue workers arrived to find a minivan that had careered through guardrails on the side of the road. An unconscious driver was found stuck inside the van. Rescue workers freed him from the minivan before rushing him to Patong Hospital.

One of rescue workers says that the minivan was heading up the hill from Patong to Kathu.

“When the driver was near the Patong City sign it appears he might have fallen asleep at the wheel. The minivan collided with the guardrail, bursting through and ending up crashing into trees. It’s lucky that the minivan hit the tree otherwise the van would have fallen 15 metres down the hill.

Police are continuing their investigation and will speak to the minivan driver when is well enough to do so.

TRAFFIC ALERTPatong Hill. From Kathu to Patong at 4.30am early this morning. The mini van driver has run through the guardrails, was stuck inside and had to be removed by rescue workers and emergency responders. Police speculate the driver may have fallen asleep at the wheel. He was alive but unconcious when paramedics arrived.VIDEO: Jao Blue Car 2299/ Newshawk Phuket