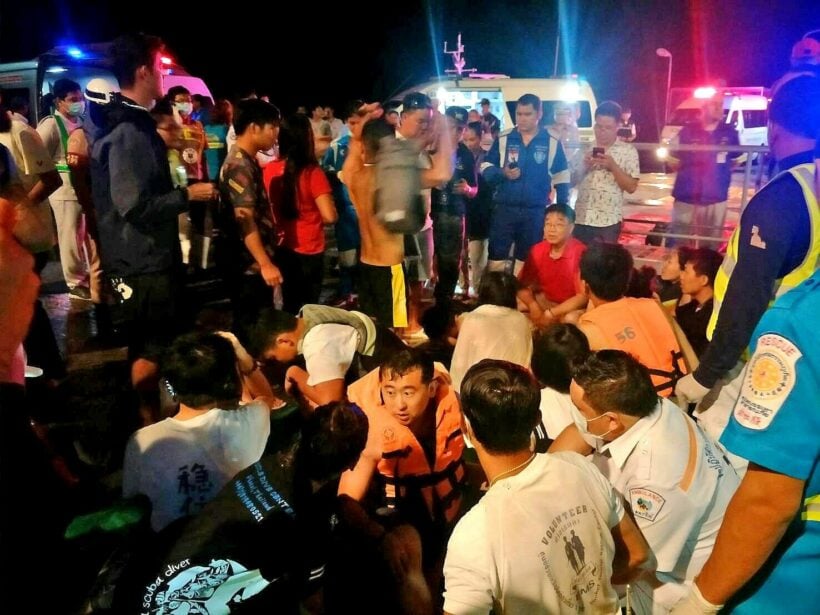 Chinese tourists are still missing following a capsize off Phuket late yesterday afternoon (Thursday). Divers are currently scouring the sunken vessel, the Phoenix, for missing people. The tour boat was one of two reported to have capsized yesterday late afternoon.

Phuket’s Governor Plodthong is keeping the media up to date with regular briefings. A sudden wind equal hit the Andaman coast around 4.30 pm yesterday surprising many of the hundreds of tour boats returning from day trips to islands off Phuket’s coast.

“We will conduct air searches and send divers to check inside the sunken Phoenix boat.”

AFP are reporting that one male downed and dozens of other Chinese tourists are still missing. The rescue mission was suspended late last evening and started again at first light this morning.

The boat that has sunk is called the Phoenix and was reported to be carrying around 90 passengers. The boat was returning to Phuket from Koh Racha. The captain says the boat started to heel over after it was hit by massive waves. The captain, as well as Navy personnel said, independently, that waves looked like they were up to 5 metres high.

Rawai’s Mayor Aron Solos told media last night around 10.30pm that the body of a man wearing a life jacket with the logo of the Phoenix boat had been fetched from waters between Koh Hei and Koh Racha.

Last night Phuket’s Governor said there are still 53 people missing. “We have stopped the rescue tonight. We’ll start again in the morning.”

Phoenix boat captain Somjing Boontham says his vessel was hit by five metre-high waves flooding the boat. He then says he asked his crew to ensure that passengers put on their life jackets. The captain also ordered the deployment of the vessel’s inflatable life rafts.