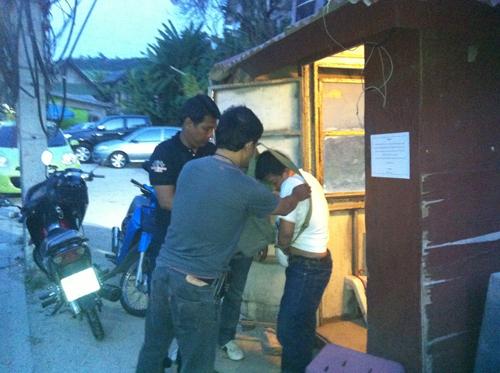 Maj Theeradet Jiraksa led fellow police officers in a sting operation, during which an undercover officer bought several pills from Sumonchai, 32, who was working as a doorman at a hotel at Karon Beach (map here).

Sumonchai, originally from Phattalung, became a household name among Muay Thai fans through his appearances on the popular The Dark Knight and The Petch Yindee (“The Happy Diamond”) programs broadcast on Thai TV channels 9 and 7.

“An undercover officer pretended to buy ya bah from Mr Sumonchai and agreed to receive the drugs at the parking lot of a hotel in Karon,” Maj Theeradet explained.

“After the handover, officers moved in and made the arrest,” he added.

“We took him to his home at the Phuket Villa 3 housing estate in Wichit and seized drug paraphernalia, including zip-lock plastic bags for packaging ya ice [crystal methamphetamine],” Maj Theeradet said.

He explained that the sting operation to snare Mr Sumonchai followed the arrests of Mr Pongrawee (no last name given), 29, and Wutthichai Arkomsilapa, 28, both from Khon Kaen.

The two men were arrested at their rented room at the Baan Kata Apartment in Karon.

“They were found in possession of 1.98 grams of ya ice,” Maj Theeradet explained.

“They told us they bought the drugs from Mr Sumonchai, so we started tracking him and eventually set up the operation to arrest him,” he added.

“We also checked Mr Sumonchai’s personal locker at his hotel, but found nothing illegal there,” he added.

Mr Sumonchai told police this was his first time selling drugs, and that all the drugs he had were bought from a friend in Rassada.

Regardless, he was charged with possession, sale and distribution of a class 1 narcotic.

“We are continuing our search for Mr Sumonchai’s friend in Rassada and other members we believe to be working together as a team of drug dealers,” Maj Theeradet said.

Phuket Gazette Sports: Motorcycling – No end in sight for the reign of Spain