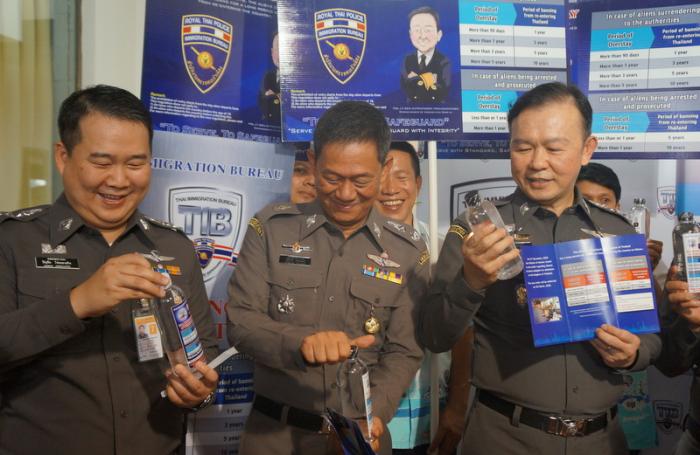 PHUKET: Children will not be blacklisted for overstaying their visas, officials confirmed today.

Thailand’s implementation of a regulation to blacklist overstayers will not affect those under the age of 18, explained Immigration Commissioner Nathathorn Prousoontorn. The news follows much uncertainty in Phuket after the regulations were announced earlier this month.

“The new penalties came into effect on March 20. They are part of the Immigration Bureau’s campaign: ‘Good Guys In, Bad Guys Out’,” Lt Gen Nathathorn explained at a public meeting at Phuket Boat Lagoon today.

The new rules were explained to the more than 400 attendees as follow:

The new rules do not include a life ban as a penalty for people who overstay their visas by 10 years or more, which was proposed in a previous plan (story here).

“We are here today to spread awareness, especially among those who work with foreigners, so that they can ensure that foreigners are aware of the laws and penalties. We admit that it’s an issue which many foreigners take lightly, as the penalty for overstaying is only 500 baht a day, with a maximum fine of 20,000 baht,” said Gen Nathathorn.

“This is all but an invitation to overstay in Thailand. People used to just pay the fine and re-enter the Kingdom without any problems. However, the new regulations will help put an end to this.”

The Immigration Bureau has collected almost 300 million baht in fines within the last six months, said Gen Nathathorn. He also noted that within this period, the number of people flagged in their database for overstaying their visa dropped from 810,522 to 486,947.

“In almost all cases involving transnational criminals, we found that they also overstayed their visas,” he said. “We welcome tourists, but only the law-abiding ones.”

Gen Nathathorn admitted that Thailand is both a destination and a point of transit for criminals.

“We have a policy of welcoming tourists in order to support our tourism industry – some nationalities don’t even need a visa to travel in Thailand. However, many foreigners exploit this situation, making Thailand a transit destination in their criminal schemes,” Gen Nathathorn said.

“Foreigners are living in almost every province in Thailand. They travel to many different places, such as Phuket, Pattaya and Chiang Mai, where they can easily hide among the large number of other foreigners. This regulation will be instrumental in protecting the innocent ones, whether tourists or investors,” he said.

Martin Carpenter, British Honorary Consul for Phuket, expressed his support for the policy.

“I think this is a very good policy. It’s very clear and precise, and should be followed,” Mr Carpenter told the Phuket Gazette.

“I am sure that in the past, possibly even now, there are some foreigners living in Thailand who overstay anywhere from a year to five years, or even more. It is irresponsible of them to take advantage of the situation. But if they don’t follow the regulations, the punishments are there, strong and clear.”

Mr Carpenter noted that the regulations are unlikely to affect those who want to work or retire here.