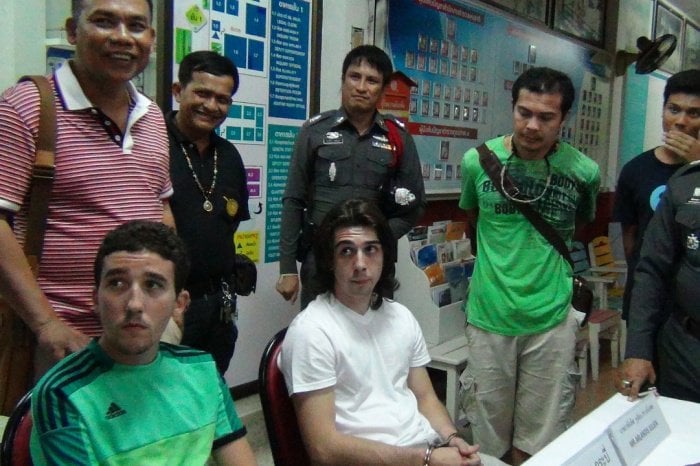 “Late last month we received a report from a bank employee about suspicious behavior by foreigners at random ATMs in Krabi and Phang Nga since January,” he explained, adding that police were withholding the name of the bank.

The bank sent police CCTV footage of the men, allowing officers to track down the suspects and prepare evidence to make the arrests.

“We finally tracked down the pair in Ao Nang. Mr Alandis and Mr Hemour were driving in the area, and we pulled them over to search the car,” said Maj Gen Nantadet.

“We found the fake ATM cards and the drugs inside the vehicle.”

The men both confessed to police that they had paid 2,000 Euro to a dark-skinned foreign man in Patong for the ATM cards in January, Gen Nantadet said.

“They also admitted that they bought the drugs from a bar employee in Patong,” he added.

Gen Nantadet confirmed that Krabi City Police are now working together with Phuket police to investigate the ATM suspects to determine whether or not the cases are related.

“We believe that they are part of the same gang that the dark skinned French nationals arrested in Phuket were part of. We also think that these men are part of a bigger network overall,” he said.

The men have both been charged with electronic card fraud and possession of a Category 5 drug.

Man arrested for smuggling more than 300 species of rare fish