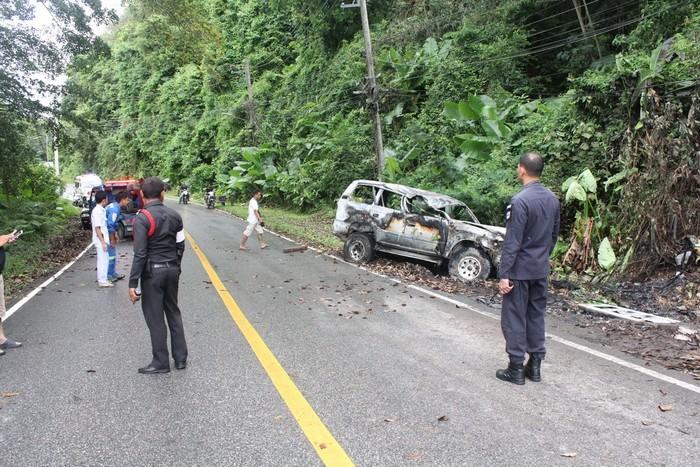 PHUKET: A 20 year old Russian diving instructor was found dead yesterday after the NGV-powered jeep he was driving crashed and burst into flames on Khao Khad Road in Wichit.

Locals ran to help after the vehicle slid off the wet road and crashed into a rocky embankment at about 3pm but were beaten back by the flames.

Rescue workers took about 20 minutes to douse the blaze. The jeep was left completely gutted.

The driver, whose name is being withheld until it can be confirmed that his next of kin have been informed, had been residing in Phuket for about a month, according to a friend who was called to the scene.

“The friend said the victim had just left a house he had been renting in Baan Ao Yon,” said Wichit Police Lt Patcharee Wongboon.

“He appears to have lost control and the NGV tanks exploded in the crash,” said Lt Patcharee.

Laguna Phuket Triathlon to go ahead as planned