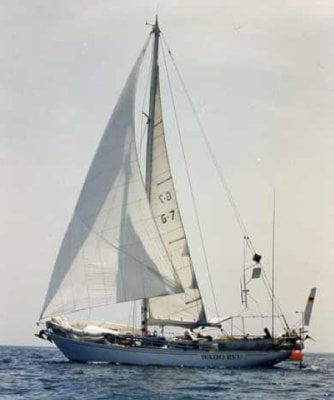 KOH RACHA: A yacht sailing Phuket’s waters has disappeared, believed stolen, while the crew were having supper ashore on Koh Racha Yai on Friday.

The yacht is the Wado Ryu, a white-hulled 12.5-meter sloop. The name of the yacht is painted in large letters along the hull. She is registered in Germany.

Pumo Stappelton, the boat’s skipper, told the Gazette that she arrived at Racha Yai at 4 pm on Friday after a four-week passage from Australia. She and crewman “Rocky” were on the way to Turkey to deliver the boat to its owner.

“By the time we arrived at Racha Yai, we reckoned it would be too late to sail into Phuket, so we decided to stay for the night, to have something fresh to eat, and a beer, and also to celebrate [a belated] Christmas.”

She said, “We made everything ready to leave the next morning, then went ashore. But when we got back at 11 pm the boat wasn’t there anymore.”

She asked a fishing boat to go out and try to find Wado Ryu but five hours of searching turned up no sign of the yacht. “We looked everywhere, but found nothing. So then we slept on the beach; we had no money, no phones, no passports – all of that was in the boat.”

The yacht’s disappearance was reported to Chalong Police Station, the Marine Police and the Third Area Naval Command.

Meanwhile, Chris Sieber, owner of the 46-foot catamaran Kilo, which went missing off Kata Beach on December 18, said today that no one has yet come forward with information leading to that yacht’s recovery, despite the offer of a US$5,000 (200,000 baht) reward.

Mr Sieber dismissed rumors that Kilo had been found off Sumatra. “No, we’ve heard nothing yet,” he said.

Anyone with information about the Wado Ryu should contact Ms Stappelton at the Shanti Lodge on Chao Fa West Rd, Tel: 076-280233 or Email: kim@shantilodge.com