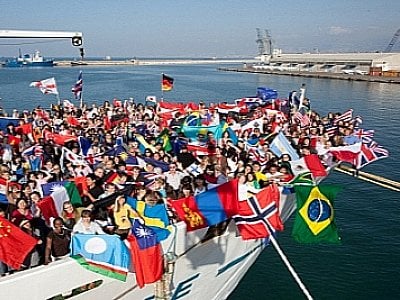 PHUKET: After six years since their last visit aboard the MV Doulos, the crew aboard the MV Logos Hope will be returning to Phuket, bringing with them more than 5,000 books as part of their “global mission to serve humanity”.

The Logos Hope is twice as large as any previous vessel operated by German-based charity GBA Ships, including the Doulos, which visited Phuket in 2006.

The Doulos, at the time the world’s oldest passenger liner, was built two years after the Titanic. She was sold to a Singaporean interest in 2009.

On board the goodwill ship are 400 volunteers from 45 different countries.

“We stop over in each country for two weeks. All aboard are volunteers. We do not receive any money to work, but we receive training and are provided facilities to learn about different cultures,” Mr Muniz said.

While in port the volunteers perform a variety of community projects to help locals in the host country.

“We have doctors on board, so during our visit in Liberia, Africa, for example, we provided dental care to local people,” he said.

In addition to maintaining the huge library of books, the volunteers stage cultural events to educate and entertain visitors on board.

At the opening of the ship’s book fair in Galle, Sri Lanka two days ago (July 1) the crew held a “Parade of Nations” to highlight the national costumes of a selection of countries around the world.

“We have yet to set the entrance fee. We are still planning on that. But six years ago the fee was only 10 baht. So, we would like to invite everyone to visit our ship,” she said.

Volunteer Nissie Attalaavnangoon was on board the Doulos when it visited Phuket six years ago.

“The reception last time was fantastic. Thousands of school students visited our ship, giving our crew the chance to learn more about Phuket.

“Our goal is not to sell books. We want to learn about the cultures of each country we visit,” she said.

However, a nominal fee is charged to come aboard.

The Logos Hope will set sail on August 28 to Penang, Malaysia, where she will remain from August 29 September 27.