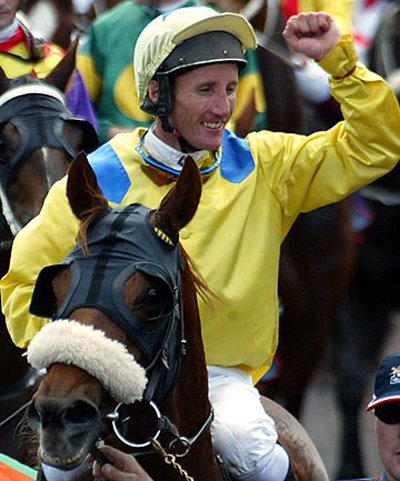 PHUKET: Australian jockey Damien Oliver, who will ride Americain in the Melbourne Cup later today, has admitted to placing an illegal bet on a rival horse and could face a lengthy ban, local media reported.

The allegations have cast a cloud over Australia’s richest and most celebrated thoroughbred race, with pundits slamming administrators for allowing the jockey, a former Melbourne Cup winner, to ride today.

Oliver, who won the 2002 race on Media Puzzle, had admitted to racing stewards that he had placed a A$10,000 ($10,400) bet on Miss Octopussy in a local race two years ago in which he rode another horse, Fairfax Media reported, citing unnamed sources close to the jockey.

Stewards revealed last month that they had been investigating Oliver over the illegal bet.

Oliver, 40, has declined to comment on the allegations directly, but said last month that he was entitled to “due process.”

His manager Mark Van Triet declined to comment on the allegations when contacted by Reuters today, but confirmed Oliver would ride American.

“It’s business as usual,” he said by telephone.

Fairfax quoted RV chief Rob Hines as saying the investigation into Oliver would be finalized in the “next week or so”, effectively after the state’s major racing carnival wraps up.

Americain, trained by Frenchman Alain de Royer-Dupre and the winner of the 2010 Melbourne Cup, is rated favorite or second favorite behind another French stayer and last year’s winner in Dunaden.

Americain’s owner Gerry Harvey said he and connections had not considered changing riders for Tuesday’s race, despite knowing the betting storm would break.

“We believe this is the right decision,” Harvey was quoted by Fairfax as saying.

The allegations against Oliver are part of a wider investigation into corruption in horse racing in the southern state of Victoria.

Local media have reported that at least two other jockeys riding in the Melbourne Cup are under investigation.

Victoria’s racing minister Denis Napthine backed authorities to ensure the race would be run with integrity.

“People can have confidence that racing today at Melbourne Cup day will be fair, reasonable and they can have a bet with confidence,” he told reporters in Melbourne.

Pundits have blamed government officials for failing to provide racing administrators the powers to stand down jockeys and other racing personnel under suspicion of corruption.

“Who knows what is yet to come to light?” a commentary in the Age newspaper said. “And yet those suspected of corruption … can keep on keeping on during Australia’s premier racing event as if nothing has happened. What a disgrace.”