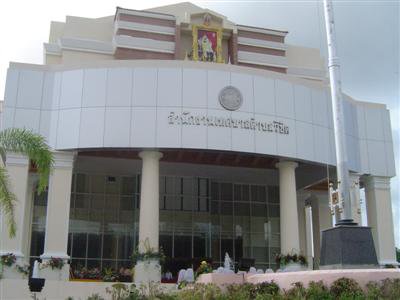 WICHIT: Wichit Municipality yesterday officially opened its new, three-story office building with a ribbon-cutting ceremony attended by some of the island’s highest-ranking officials.

The new building, completed at a cost of just over 96 million baht, sits on five rai on Chao Fa East Rd, next to Wat Thepnimit.

Cutting the ribbon was Wallop Pringpong, Deputy Director-General of the Interior Ministry’s Department of Local Administration.

The new offices follow the August 30, 2007 upgrade of Wichit from a sub-district (tambon) to a municipality (tessaban tambon).

The first floor houses the Office of the Municipal Clerk as well as the Finance, Public Works, Sanitation and Environment, and Education departments.

The offices of the executive board and other council members are on the second floor, while the third floor has meeting rooms.

Wichit has a registered population of 38,701 living in a total of 21,274 registered households, with a population density of 686 persons per square kilometer.