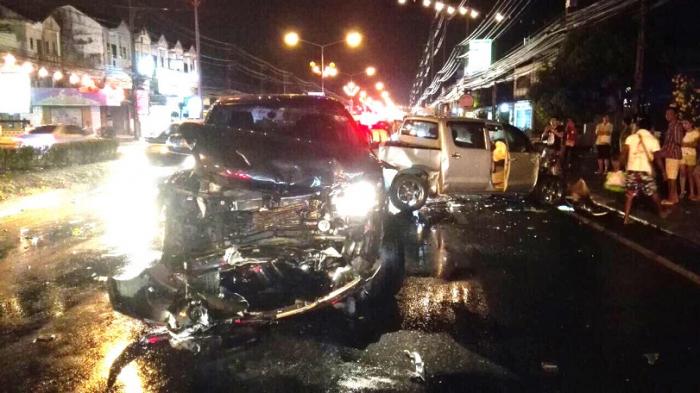 PHUKET: A slippery road surface due to rain was blamed for a three car pile-up on Thepkrasattri Road on Thursday night, causing long tailbacks and delays for northbound motorists.

Two people were injured in the multi-car collision near Wat Phra Thong in Thalang at about 10pm.

The driver of a Mazda sedan heading southbound lost control and rammed into oncoming traffic after crossing the median strip, hitting a Toyota pick-up truck. A BMW, also travelling northbound, then rear-ended the pick-up truck.

“Both victims were taken to Thalang Hospital. It was raining at the time and took about an hour to clear the vehicles from the road and allow traffic through,” said Capt Nattaya Suwanpong of the Thalang Police.

Police are awaiting further details before deciding to press charges.

Capt Nattaya advised motorists to be especially careful on the roads with the onset of the rainy season, as the road surfaces are slippery which makes driving dangerous.

“Motorists should check the condition of their vehicles, drive slowly and always wear a seat belt,” he said.

Join the festivities at the last Lighthouse Market of the season