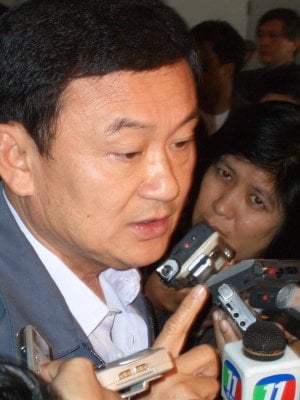 PHUKET CITY: PM Thaksin arrived in Phuket yesterday morning to hear complaints by Phuket residents about the government’s handling of the tsunami disaster.

The meeting, held at the Royal Phuket City Hotel, was attended by some 500 people, including Cabinet ministers and scores of other government officials. The Cabinet ministers reported on the progress of the various relief programs assigned to them, after which local businesspeople and other members of the private sector were allowed to comment.

After the meeting, PM Thaksin told the press that the government would continue to support those whose homes and businesses were damaged or destroyed by the tsunami.

“There is 20,000 baht [available] for each person affected by the tsunami. This is just initial relief funding; we will consider additional support on a case-by-case basis.

“The 20,000 baht may not help all victims fully recover, but it should at least get them back on their own feet,” he said.

“Most of us have done our best … and aid has reached the majority of those who need it, but there are still more details to go over. Some sectors may have not have been accounted for yet because they were less directly affected,” he said.

“However, we still need to push more operations to make things work better, as there are [still] some gaps between the central [government’s] policies and the operation of local government organizations,” he said, in reference to widespread complaints that distribution of funds has been slowed to a crawl by bureaucracy.

PM Thaksin added that he had received many phone calls from abroad asking about progress in the identification of dead bodies.

“I have expedited the process so that it moves quickly and accurately. If we can identify any of them, we will be ready to send them back. I think it is going to move very fast from now on because we got some DNA analysis [results] back from China already and we [are ready to] start the process of DNA matching.”

PM Thaksin, who is chairing an international conference in Phuket today on the establishment of a tsunami early-warning system for the Indian Ocean, said Thailand would first set up its own early-warning system based on seismic data alone. The system, to be budgeted at 10 million baht, could be operational withing two months, he said.

The system would warn of any impending tsunami threat through radio networks and would serve as a stop-gap measure while the planned international early-warning system is being developed.

The PM added that the international warning system would be more accurate, as it would operate automatically using data taken directly from the sea.

“This will be a full early-warning system, and it will built using funds from many countries,” he said, adding that Thailand was ready to contribute the first US$10 million to the fund.

He added that Thailand would offer to host the system’s operational headquarters.

After poor South Koreans die in flooded basement homes, will there be change?