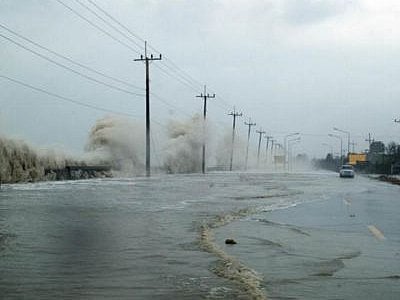 But there were no reports of panic in Phuket yesterday, although high winds prevailed throughout much of it, accelerating toward dusk.

In Chumphon, where villagers still consider Christmas day as inauspicious, waves ravaged hundreds of houses and winds uprooted many trees. Some local fishermen lost radio contact with others when the sea turned hostile.

He was speaking after the waves, two to four metres high, ravaged seaside restaurants and shops along the coastline.

“The waves were so high and the winds were so strong that they were frightening,” Hua Hin Beach Shop Club ‘chairwoman’ Somprapa Morakan said.

She said the shops would be closed until the weather returned to normal. Her club oversees shops along the Hua Hin beachfront from the Hilton Hotel to the Sofitel.

She said she had already instructed the shopowners to move their possessions out of their structures as a precaution. “It has been forecast that the rough weather conditions will continue for a few more days,” she said.

Wanchai Iam-udom, a 62-year-old fisherman, was convinced that the waves were the highest in the province since Typhoon Gay more than two decades ago.

“It’s dreadful because the waves have already broken up three small fishing trawlers,” he said.

Tourists along Prachuap Khiri Khan’s coastline have been warned against playing in the sea.

Many events will take place today in the tsunami-hit provinces to commemorate that tragedy.

Here in Phuket, an international ‘Medical Rally‘ at Nai Yang beach is in it’s closing day. The rally sees disaster medical assistance teams from all over Thailand, plus Japan, Korea and Sri Lanka, in a training exercise to deal with large scale disasters such as the 2004 tsunami.