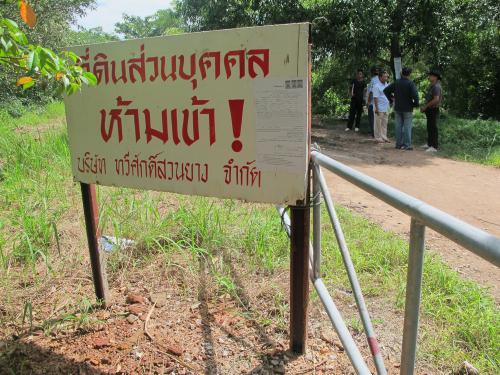 PHUKET: Vice Governor Somkiet Sangkaosuttirak visited Pa Khlok yesterday afternoon to investigate claims made by residents that a path on public land had been blocked off, denying them access to a pier where they keep their fishing boats.

About 50 residents had travelled to Phuket Provincial Hall the day before to lodge a complaint with Governor Maitri Inthusut (story here).

The Vice Governor, along with Officers from the Thalang Land Office, the Royal Forest Office and other relevant departments, met with residents of Baan Bangla and a representative of the company that claims to own the land, Thaveesak Landing Company.

The representative, who declined to give his name to the media, presented a Chanote title that he said proved the Thaveesak company owned the land.

Chate Pantip, a former Baan Bangla headman, countered with a map that he said showed the Thaveesak land was previously registered at a different location, and other land claims in the area had grown in size.

Vice Governor Somkiet accepted the documents and said that titles for all the land in the immediate area, not just that around the residents’ path, would be investigated, and the history of the titles thoroughly checked to make sure they were authentic.

A committee made up of residents, the Thaveesak company representative and relevant government officers would be formed to resolved the dispute, said V/Gov Somkiet.

The path to the pier was temporarily opened yesterday afternoon to give the residents access to their boats.

“I also asked the Thaveesak company representative to get permission from the company to keep the path open permanently,” said V/Gov Somkiet.