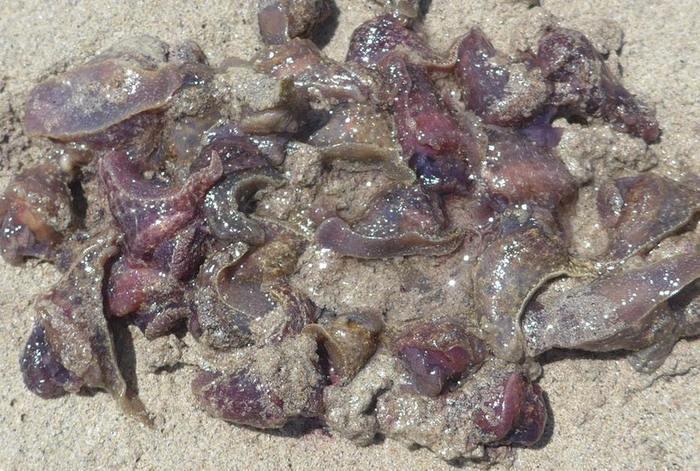 PHUKET: Marine experts are attempting to understand why more than a million sea slugs washed up on a Phuket beach this morning.

The name ‘sea slug’ is a common name used specifically for gastropods that are not shell-bearing or appear not to be shell-bearing. Experts believe that the sea slugs found on Kamala Beach are, in fact, sea hares. However, they have yet to determine the exact species.

“Adult sea hares are mostly large, bulky creatures. Juveniles are usually not noticed along the shoreline,” said Kongkiat Kittiwattanawong from the Phuket Marine Biological Center (PMBC). “However, that doesn’t appear to be the case here.”

‘Sea hare’ is a direct translation from the Latin lepus marinus, which is derived from their rounded shape and from the two long rhinophores that project upwards from their heads, thought to look similar to the ears of a hare.

“A team was sent up there to collect samples of both the animals and the seawater to determine exactly what has caused this,” said Charatsee Aungtonya, a marine expert from the Department of Marine and Coastal Resources (DMCR) Region 5.

Officials at the PMBC and the DMCR Region 5 were made aware of the situation after local social media networks became abuzz with pictures of the tiny marine creatures on the shore of Kamala.

No one has ever seen so many slimy balls on Kamala Beach before. Video: PGTV