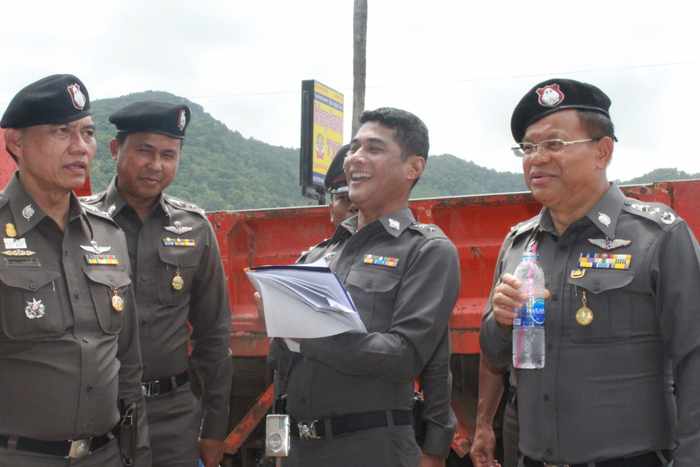 Lt Gen Panya explained that the Army’s support was instrumental in enabling months of hard police work to come to fruition.

“Since the coup, it has been easy for us to carry out raids, as we have military support from the Fourth Army Area Command,” Gen Panya said.

Officers will turn their sights on the Patong taxi mafia tomorrow, after having destroyed illegal taxi stands in Cherng Talay, Kata-Karon and Kamala today (story here).

“We are now collecting information from witnesses about the taxi mafia operating in Patong. It might take a long time before we get the results we want,” Gen Panya said.

With the Army’s support, police were able to serve 93 arrest warrants. Video: PGTV

“In the past, we just arrested the small guys. Now, however, we are going to root out the people who who are behind the cartels.

“As soon as we have enough evidence, we will arrest them.”

Yesterday, a deployment of 100 soldiers from Southern Thailand provided military support to a task force of 1,110 police officers and 40 volunteers who swept through the west coast to purge the island of illegal, violent, abusive and cheating taxi, tuk-tuk and minivan drivers (story here).

Officers served 73 arrest warrants before meeting with the press yesterday and handed out 20 more after that, leaving officers just 18 arrest warrants shy of serving the 111 warrants issued for the blitz.

“I believe the remaining suspects will turn themselves in soon,” Lt Gen Panya said.

Thailand’s coup given credit for taxi cartel crackdown in Phuket